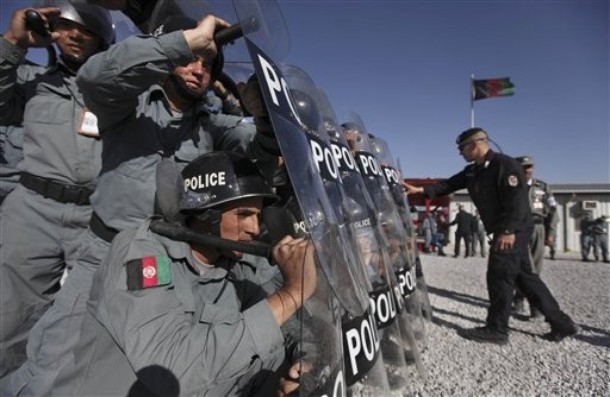 From Spencer Ackerman, the Danger Room:  Over the past year, Afghanistan’s Ministry of Interior has fired hundreds of leading police officials, according to a forthcoming NATO report on the Afghan security services. And that purge is just the beginning, even as police ranks are scheduled to expand.

As of November, the newly-appointed Afghan interior minister, Bismullah Mohammadi, has “changed 32 top ministerial leaders and many top provincial leaders” in his first four months on the job, according to a report on institutional development at the ministries of Interior and Defense prepared for the NATO Training Mission-Afghanistan. That’s on top of the elimination of “hundreds” of top police “leadership positions leadership positions deemed to be wasteful or redundant” over the past year. And “thousands of patronage positions” are expected to be jettisoned in the coming months.

Even though NATO is rushing to get more police in uniform so the cops can help Afghan soldiers take over security responsibilities from the U.S. by 2014, NATO is cheering the purge on. The Afghan police have had persistent problems with competence, corruption and even basic literacy. The report, acquired by Danger Room and scheduled for public release on Thursday, judges that Mohammadi’s firings, along with other recent “major reforms” to the ministry, will “help reduce bureaucracy, negative incentives and corruption.”

NATO is also hopeful about Mohammadi’s new squad. The new deputy for strategy and policy is getting rid of “thousands of patronage positions” from the ministry. The new logistics chief is “honestly assessing shortfalls” in equipping the cops, after accountability was “negligible” last summer. The new commander of the elite police force, the Afghan National Civil Order Police, is stressing “ethics, training [and] professionalism.”  (photo: AP)