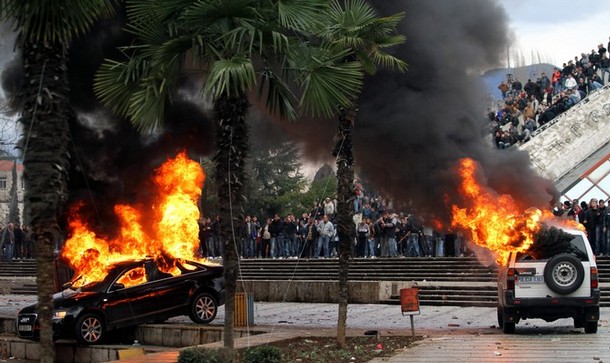 From Nick Squires, the Telegraph:  Albania’s prime minister has thanked the army for heading off what he called an attempted coup last week, but warned that more violence is likely in the next few days.

Three people were killed and more than 150 injured in the capital, Tirana, last Friday during violent clashes between tens of thousands of opposition supporters and security forces.

"January 21 was the first coup attempt, and the attempts to seize the democratic institutions by violent means will continue," said Sali Berisha, in an apparent reference to a fresh opposition protest due to be held this Friday. …

Edi Rama, the leader of the opposition and the mayor of Tirana, has repeatedly denied trying to stage a coup, insisting demonstrators just wanted to persuade the government to resign. (photo: Getty)