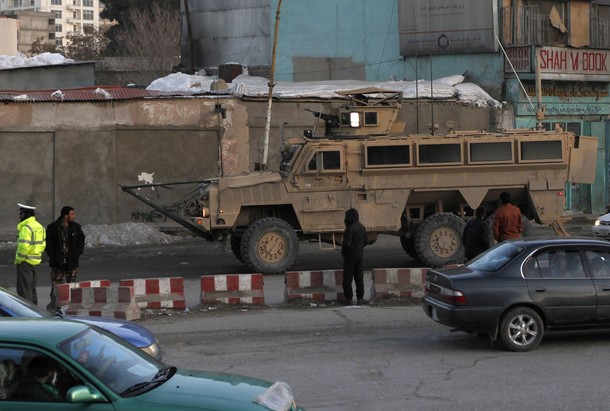 From the BBC:  Two Nato officers have been killed in the interior ministry in the Afghan capital Kabul, coalition officials say.

Nato said an "individual" had turned his gun on the officers but denied earlier reports he was a Westerner.

A UK embassy spokesperson had earlier said all British civilians were being withdrawn from the ministries in what was hoped would be a temporary measure.

The shootings come amid five days of deadly protests over the burning of copies of the Koran by US soldiers. . . .

The BBC’s Orla Guerin in Kabul says eight shots were reported inside the building, which should be one of the safest in the capital, and that any Afghan who carried out the attack would have had the highest clearance.

Local media reports said the gunman was an Afghan policeman but this has not been confirmed. . . .

The Taliban said in a website statement that it carried out the attack in response to the Koran burnings.  (photo: Reuters)