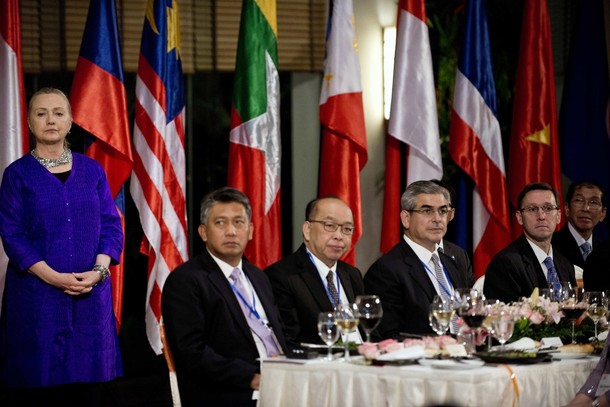 From Stephen M. Walt, Foreign Policy:  First, a May 2012 agreement to increase security cooperation and intelligence sharing between South Korea and Japan (a move that the United States clearly supported) has foundered in recent weeks , in good part due to domestic opposition in South Korea. . . . Second, the recent ASEAN summit failed to issue a closing communiqué fo the first time in the organization’s forty-five year history, largely because there was no consensus on how to respond to China’s growing assertiveness in the South China Sea.

Both events highlight some of the key obstacles to effective balancing behavior in Asia: 1) the temptation to free-ride, 2) lingering historical tensions between key members, and 3) China’s ability to cultivate certain regional states (in this case, Cambodia) and block a coordinated regional response.

States do tend to balance against threats, and it is no surprise that the United States has begun to focus more attention on Asia and that many Asian states welcome the enhanced attention. But creating effective balancing coalitions is neither easy nor automatic, and it’s going to require more time and skill to pull it off, especially if the United States wants to make sure that other states pull their weight and don’t leave Uncle Sucker doing all of the heavy lifting. And my guess is that managing intra-alliance diplomacy in Asia is going to make the history of NATO look like child’s play.   (photo: AP)