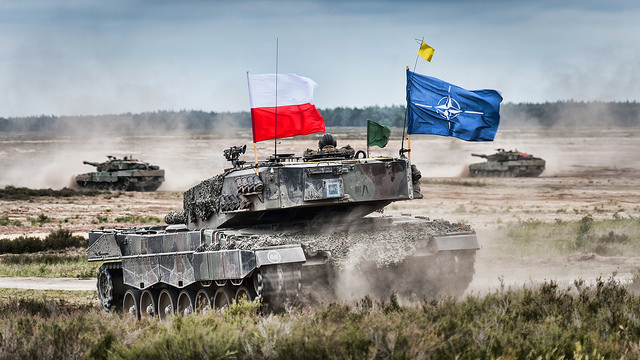 NATO was created in 1949 to ensure that none of us will ever have to live through another world war. The result of the alliance has been an unprecedented period of peace and security for the citizens of North America and Europe.

The U.S. has had close allies and friends in NATO that no other world power can match. Together, the alliance’s 29 countries represent half the world’s economic and military might.

But for all NATO has achieved, we cannot be complacent. Facing the most complex and dangerous security environment in a generation, we must invest more in our collective defense. In an unpredictable world, we must do what is necessary to keep our nations safe….

In 2014, only three allies—the United States, the United Kingdom and Greece—met the 2% target. This year, we expect that number to rise to eight, adding Estonia, Latvia, Lithuania, Poland and Romania. Furthermore, a majority of allies have plans to meet their 2% commitments by 2024, while the rest are moving in the right direction. There is still a long way to go, but NATO members have turned the corner on defense spending….

NATO’s credibility as an alliance—in each other’s eyes, and in those of our potential adversaries—relies on sharing the defense burden fairly. Ahead of our summit on July 11-12 in Brussels, I have been carrying that message with me every time I meet with allied leaders….

From the Balkans to the North Atlantic, from the Black Sea to the Baltic, American and European soldiers, sailors and airmen are working together through NATO to keep our nations safe….

That’s why NATO allies invoked Article 5, our mutual-defense clause, after 9/11—the first and only time we have done so. It’s why hundreds of thousands of European and Canadian troops have served shoulder-to-shoulder with Americans soldiers in Afghanistan. More than 1,000 of them have made the ultimate sacrifice.

It’s no secret that there are differences among NATO countries on serious issues such as trade, climate change and the Iran nuclear deal. But we have always managed to overcome our differences before. Two world wars and a Cold War have taught a simple yet powerful lesson: United, we are stronger and safer.

Jens Stoltenberg is the Secretary General of NATO