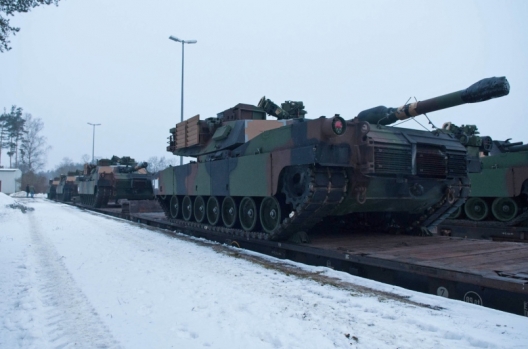 From Michael S. Darnell, Stars and Stripes: Less than a year after they left European soil, American tanks have returned to military bases in Germany where they had been a heavy presence since World War II. . . .

On Friday, the last of 29 M1A2 SEPv2 Abrams tanks were offloaded at the railhead at the Grafenwöhr training facilities. These heavily armored vehicles are upgraded versions of the older Abrams that left 10 months ago and will become part of what the Joint Multinational Training Command at Grafenwöhr is calling the European Activity Set.

“The EAS is a pre-positioned, battalion-plus-size equipment set with headquarters pieces and command-and-control elements,” said Col. Thomas Matsel, operations officer with the JMTC. “Units that utilize the EAS will have access to the entire breadth of military operations they may have to conduct.”

The Abrams tanks will join 33 M2A3 Bradley infantry fighting vehicles and dozens of other heavy support vehicles that will be positioned at Grafenwöhr to be used at the training facilities there, at the Joint Multinational Readiness Center at Hohenfels and at other training areas across Europe. . . .

Several units are already scheduled to use the EAS. The 1st Brigade, 1st Cavalry Division, is first and will take temporary ownership of the vehicles, which will accompany them as they take part in three major exercises spanning from France to Latvia later this year.

From John Vandiver, Stars and Stripes:  From World War II on through the Cold War, tanker units were a heavy presence in Germany. At its peak, Germany was home to 20 NATO armored divisions, or about 6,000 tanks, according to the 21st TSC [Theater Sustainment Command].