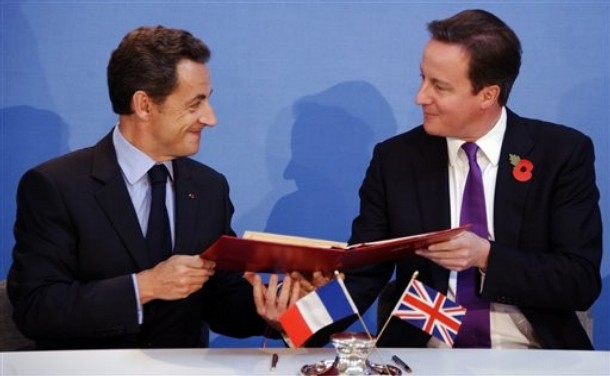 From Benoit Gomis, defensemanagement.com:  The recent crisis in Libya has provided an illustration of the current and future opportunities and challenges for the alliance resulting from a renewed Franco-British partnership. On the one hand, the UK and France have proved to be the only European forces with sufficient military power, political will and operational commitment to provide leadership during international crisis management missions. In particular, without the strong political push from Sarkozy and Cameron, the UN Security Council Resolutions 1970 and 1973 would have been very difficult to attain. On the other hand, some tensions appeared at the onset of the conflict over the aims of the mission, communications on the ground, and, most notably, command and control. It was reported that France was in favour of a Franco-British command taking over from the initial US military leadership, but the UK insisted that NATO should be in charge of the next phase. France has traditionally taken an independent stance within NATO, but the key issue is that the UK lacks the confidence to intervene in a mission where the US is not significantly involved.

Some lessons can be drawn from the ongoing Libyan crisis. France and the UK can act as a strong political driver, but need more partners to achieve military success on the ground. For example, they were responsible for only half of the first 100 air strikes, with the US reluctantly taking charge of the other half. The likelihood of American disengagement from Europe and North Africa, which Europeans have expected and in some cases feared since the end of the Cold War, has never been higher. The huge national debt (over $14trillion) the country is now facing has become, to use Admiral Mike Mullen’s words, the single biggest threat to national security, and may require the US to think twice before launching costly military interventions, especially in Europe’s backyard.

This raises the question of how strong a crisis management force NATO would be without the US. If the UK and France need other European military partners with the defence capabilities and political will to use them, who should they turn to? Countries like Germany and Italy (at least initially) have proved rather reluctant to intervene. Most have also expressed suspicions about the Franco-British treaties, claiming that the partnership should remain open to other potential members. While some have argued that the Libyan crisis has marked the death of the EU’s Common Security and Defence Policy (CSDP), it could actually signify a real turning point for NATO. Franco-British cooperation is not a disease that could threaten the alliance’s life, but rather a symptom of profound harm within the organisation – namely the US disengagement. Only time will tell whether the UK, France and others will help NATO to survive or turn to alternatives.