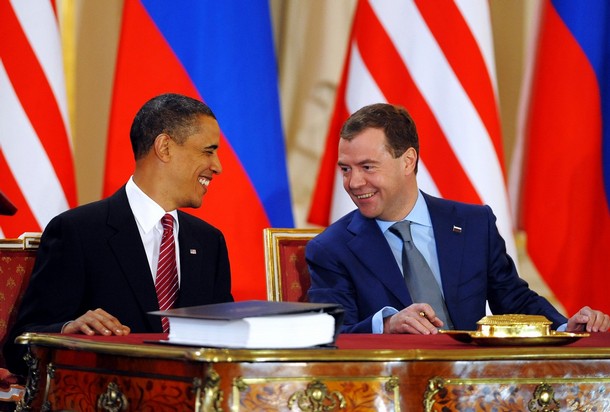 From Peter Baker, the New York Times:  Fresh from winning Senate approval for a new strategic arms treaty, President [Barack] Obama plans to return to the negotiating table with Russia next year in hopes of securing the first legal limits ever imposed on the smaller, battlefield nuclear weapons viewed as most vulnerable to theft or diversion. …

Today, the United States retains about 500 tactical weapons, according to the figures released this year, and experts say about 180 of them are still stationed in Belgium, Germany, Italy, the Netherlands and Turkey. Russia has between 3,000 and 5,000 of them, depending on the estimate, and American officials have said Moscow moved more of them closer to NATO allies as recently as last spring in response to the deployment of American missile defense installations closer to its territory.

“In the 21st century, there is no plausible military, political or deterrent justification for the Russian government to deploy several thousand such weapons,” said Frank Miller, a former national security aide to President George W. Bush and now now at the Scowcroft Group in Washington.

The imbalance animated Republican opponents of the New Start treaty during the Senate debate. “Remember, the Russians have a 10-to-1 ratio of tactical nuclear weapons over us — 3,000 to 300 — not talked about in this treaty, an important issue,” said Senator George LeMieux, Republican of Florida, who inserted the provision calling for new talks in the resolution of ratification accompanying the treaty.

But other experts warned that it would be hard to persuade Russia to give up its advantage without getting something in return. If not a concession on missile defense, these experts said Russia would certainly want to talk about paring back the large stockpiles of stored strategic weapons that are also not covered by the New Start treaty.

In that category of weapons, the United States has the advantage. It reported having about 2,600 strategic warheads in reserve, while experts estimate that Russia has 1,000. At least some of the weapons to be removed as a result of New Start would simply go into storage.

Steven Pifer, a former arms control official at the State Department, said one way to devise a deal would be to negotiate an overall cap on all nuclear weapons of perhaps 2,500 each. Then both sides would have to reduce the weapons they have the most of, but precise parity in each category would not be required.  (photo: Getty)