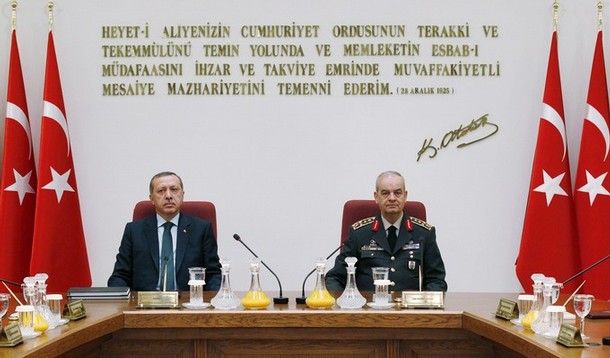 From AFP:  Turkey’s military on Wednesday blocked the promotions of generals and admirals indicted over an alleged 2003 coup plot, avoiding a confrontation with the government, a report said.

The chiefs of staff sent the government a list of promotions after an annual meeting, excluding 11 senior officers who are facing charges of conspiring to topple the Islamist-rooted administration, the NTV news channel said.

President Abdullah Gul approved the list, ending several days of tensions between Turkey’s political and military authorities over the suspects’ possible rise up the ranks, the broadcaster added.

Twenty-five serving generals and admirals featured on a list of 102 suspects for whom an Istanbul court in July issued an arrest warrant over the alleged putsch plan, but only 11 of those were eligible for promotion this year.

The government had opposed the promotion of the 11 officers and if the army had gone ahead with them it could have sparked a new crisis between the two powers.

From Marc Champion and Erkan Oz, the Wall Street Journal:  The general staff had issued a statement and legal assessment ahead of the council meeting, saying the men could be promoted so long as they were not in custody. Hours after the statement, a court ordered their arrest, along with another 91 suspects in the case. None complied, pending appeals, but government opposition to the promotions appears to have prevailed.  (photo: Reuters)