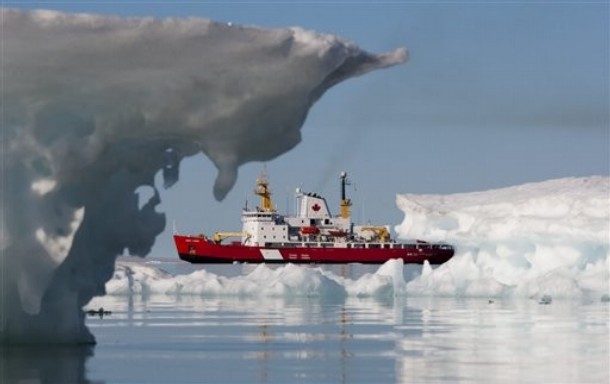 From Jacquelyn Ryan, the Washington Post:  The Obama administration, like the Bush administration before it, has identified the Arctic as an area of key strategic interest. The U.S. military anticipates the Arctic will become "ice-free" for several summer weeks by 2030, possibly as early as 2013.

But the United States does not have the military and civilian resources it says it needs to successfully operate there – and there are few indications that any significant ones will be forthcoming.

In a report last September, the Government Accountability Office said the Coast Guard lacks adequate infrastructure or equipment in the Arctic and that its funding for such programs faces uncertainty.

The Arctic is believed to hold nearly a quarter of the world’s untapped natural resources and a new passage could shave as much as 40 percent of the time it takes for commercial shippers to travel from the Atlantic to the Pacific.

The Arctic nations – Russia, Canada, Denmark, Norway and the United States – have been preparing to claim larger chunks of territory under a clause in the treaty that governs the world’s waters. Non-Arctic nations like China and South Korea also have been eyeing the economic potential in the far north.

"With 20 percent of the yet-to-be-discovered oil, gas and minerals remaining in the world in the Arctic, the U.S. can’t risk losing it," said Rear Adm. Christopher C. Colvin, commander of Alaska’s 17th Coast Guard District, from Anchorage.

The Department of Defense has taken notice. Its 2010 Quadrennial Defense Review says that understanding security and environmental issues in the Arctic is a key challenge. …

In 2007, Russia planted a flag in the waters below the North Pole. Canada planted one nearby soon after. Denmark placed a flag on the north’s contested Han Island, which Canada promptly removed and delivered back to Danish officials. Canada bought fleets of F-35 fighter jets and is building a new base along its Arctic coast. Russia is building new icebreakers and new nuclear-power stations on its north coast.

Unlike other well-equipped Arctic powers, the United States has only one working ship capable of navigating in ice-covered waters and no permanent military installation within the Arctic Circle.  (photo: AP)

The thing is, it’s not icebreakers and patches of wind-blasted tarmac that would really matter in some future North Pole showdown. In the Arctic, as in any sea battle, American nuclear attack submarines — quiet, versatile and lethal — would make all the difference. U.S. subs have been sneaking around under the Arctic ice, and occasionally surfacing, for decades. Today, they even carry geologists and other scientists in order to help map Arctic mineral deposits.

“In addition to being more heavily armed than most foreign boats, U.S. submarines generally have superior quieting and combat systems, better-trained crewmen, and much more rigorous maintenance standards,” Bob Work wrote in 2008, before becoming Navy undersecretary. “As a result, the U.S. submarine force has generally been confident that it could defeat any potential undersea opponent, even if significantly outnumbered.”