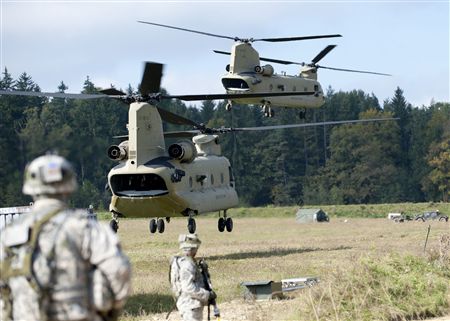 From John Vandiver, Stars and Stripes:  The U.S. has been restructuring its Europe-based force since the end of the Cold War, when there were about 300,000 U.S. troops in Europe. There are about 80,000 today, and the drawdown continues with at least one brigade scheduled to return to the States by 2015, though military leaders hint it could leave much sooner.

With massive budget cuts looming, the withdrawal of the last U.S. troops from Iraq and a drawdown of U.S. combat troops from Afghanistan slated to be completed by 2014, military leaders are re-evaluating the scope and focus of the military, and that is raising questions about how large a force is needed in Europe and where it should be located. . . .

One option for cutting costs, some argue, is to use U.S.-based forces to help build partnerships with militaries in eastern Europe and Africa. Recently, Marine Forces Europe showed how that could be done when it launched its Black Sea Rotational Force, which consisted of U.S.-based Marines on a five-month mission to conduct training exercises across eastern Europe.

According to data provided by EUCOM, the National Guard led 207 “military-to-military” engagements with armed forces across Europe in fiscal 2011, one example of the large role played by U.S.-based servicemembers. . . .

While it remains to be seen whether the current budget crisis will result in major adjustments to the force structure, some changes will be coming for the troops and the 130,000 family members who accompany them at bases from Germany and the United Kingdom to Italy and Spain.

While all service branches are represented in Europe, the Army and its 42,000 soldiers is the largest, followed by the Air Force with about 25,000 airmen. Marine Forces Europe maintains about 150 troops in Germany, relying on rotating forces to carry out its missions. The Navy also maintains a relatively light footprint, with about 8,000 sailors in Europe, though its strategic importance may be increased, given plans to permanently assign four missile defense-equipped destroyers to the 6th Fleet in Naples, Italy. . . .

When retired Gen. [and Atlantic Council Board member] James Jones was running EUCOM between 2003 and 2006, the military was in the midst of its biggest transformation since the collapse of the Soviet Union. Jones, who would go on to serve as President Barack Obama’s first national security adviser, was the main architect of a downsizing in Europe that continues today. In recent years, dozens of bases have closed as part of that plan. In 2003, there was a push to cut much deeper.

“I used to argue with Secretary [Donald] Rumsfeld over this,” said Jones, recalling his battles at the Pentagon with the former defense secretary. “His idea was to bring everybody home.”

Jones cautions against a wholesale reduction, which he says would jeopardize U.S. standing in NATO and strain EUCOM’s training mission.

“It’s a question of how much is enough and how much do you need to do what you want to do,” Jones said. “Whatever forces we leave on the continent, they are not going to be European forces, they’re going to be Euro-African forces. This is a platform for Africa as well. Being closer to Africa in Europe is a lot better than being in Fort Carson.”

Without offering specific numbers, Jones said the mission in EUCOM should be executed by a mix of rotational and permanently stationed units.

Regarding a large-scale drawdown, he said, “I would be very careful. Where is Russia going to go in the next 10 years under [Prime Minister Vladimir] Putin? . . .”

For Jones, wholesale cuts to the military’s presence in Europe and across the globe would come with big risks. Without it, “you create vacuums around the world,” Jones said. “If all you want to do is fight, then bring them home.”