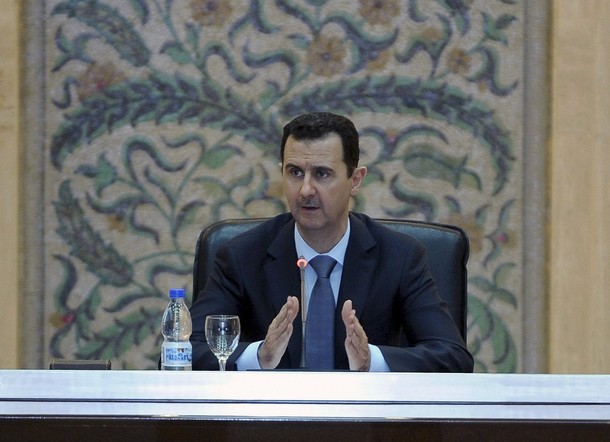 From Oliver Holmes, Reuters:  Syrian President Bashar al-Assad declared on Tuesday that his country was at war and ordered his new government to spare no effort to achieve victory, as the worst fighting of the 16-month conflict reached the outskirts of the capital. . . .

The declaration that Syria is at war marks a change of rhetoric from Assad, who had long dismissed the uprising against him as the work of scattered militants funded from abroad.

"We live in a real state of war from all angles," Assad told a cabinet he appointed on Tuesday in a speech broadcast on state television.

"When we are in a war, all policies and all sides and all sectors need to be directed at winning this war."

The rambling speech – Assad also commented on subjects as far afield as the benefits of renewable energy – left little room for compromise. He denounced the West, which "takes and never gives, and this has been proven at every stage. . . . ."

The Syrian Observatory for Human Rights, a group which compiles reports from rebels, said 115 people were killed across Syria on Tuesday, making it one of the bloodiest days of the conflict. Its toll included 74 civilians it said had been killed, including 28 in Qudsiya.

It described heavy fighting near the headquarters of the Republican Guard in Qudsiya, and in other Damascus suburbs of al-Hama and Mashrou’ Dumar, just 9 km from the capital. . . .

Turkish Prime Minister Tayyip Erdogan said Syria must beware the wrath of Turkey after Syrian forces shot down a Turkish warplane on Friday at the Mediterranean coast. He ordered his armed forces to react to any threat from Syria near the border.

"Our rational response should not be perceived as weakness, our mild manners do not mean we are a tame lamb," he told a meeting of his parliamentary party. "Everybody should know that Turkey’s wrath is just as strong and devastating as its friendship is valuable."

NATO member states, summoned by Turkey to an urgent meeting in Brussels, condemned Syria over the incident in which two airmen were killed. The Western alliance called the incident "unacceptable" but stopped short of threatening retaliation.

NATO’s cautious wording demonstrated the fear of Western powers as well as Turkey that armed intervention in Syria could stir sectarian war across the region. So far there has been no sign of an appetite for intervention like that carried out last year by NATO against Libya’s Muammar Gaddafi.

NO ACTION "AT THIS STAGE"

A Turkish official said Ankara’s ambassador had not asked the NATO envoys for action "at this stage". Erdogan’s speech was seen in Turkey as less belligerent than it might have been. . . .

Nevertheless, Turkish officials say they are ready for scenarios that include a possible need to protect civilians near the border. A Turkish official who asked not to be identified said: "For Turkey there are two bad scenarios: one, a mass influx of refugees and two, large-scale massacres in Syria."

"Ankara has not taken a decision for military intervention or a humanitarian corridor at the moment. But if these are needed, everybody would prefer that they will be done with international legitimacy. However, if things go really badly we have to be ready for any kind of eventuality," he added.  (photo: SANA/Reuters)