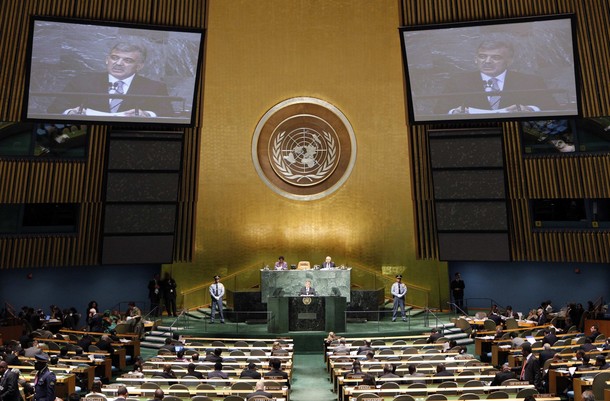 From Mark Landler, the New York Times:  If the United Nations General Assembly often serves as a stage for ambitious countries to project a new image, none has grabbed that opportunity this year with as much vigor as Turkey.

In a flurry of speeches and meetings — and one meeting that did not happen — the Turkish president, Abdullah Gul, defended his country’s close ties to Iran, proclaimed Turkey’s intention to become a leader in the Muslim world, and spurned an attempt to mend fences with Israel over its deadly raid on an aid flotilla bound for Gaza.

Turkey’s muscle-flexing has left the United States uneasy, with administration officials worried that Iran had obtained access to financing for its nuclear program through Turkish banks, and that Turkey’s rift with Israel could complicate American efforts to make peace in the Middle East. …

Mr. Gul said Turkey would adhere to the United Nations sanctions, but would not allow the measures to constrict its broader trade with Iran.

On Wednesday, Turkey’s trade minister said in Istanbul that the American-led campaign to ban all banking transactions with Iran was a mistake. Turkish officials said it was up to Turkey’s banks and companies to decide whether to go along with tougher unilateral sanctions decreed by the United States and the European Union.

“If the demand is for Turkey not to have any trade, any economic relations with Iran,” Mr. Gul said, “it would be unfair to Turkey.” He claimed that some American and European companies continued to do business with Iran under new names, circumventing the sanctions. “That is why the sanctions do not yield the results that are envisioned for them, in most cases,” he said. …

Treasury Department officials have visited Turkey to urge the government to put the sanctions into effect. The United States has also reminded Turkey of its obligations as a member of NATO.

A Treasury official said that what mattered more than Turkey’s public stance was the response of Turkish banks and companies. He said many were worried that dealing with Iran could have repercussions on their business in the United States and Europe.  (photo: Reuters)