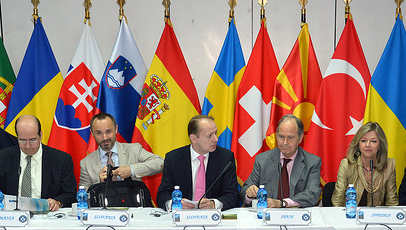 Austria will send more peacekeepers to the Balkans and Africa after its withdrawal from the Golan Heights last year raised questions about the neutral Alpine country’s international commitment.

Austria’s unilateral decision to pull its troops out of the U.N. peacekeeping force in the Golan, where it had been the biggest contingent, provoked anger in Israel and an expression of “regret” from U.N. Secretary-General Ban Ki-moon at the time.

Defence Minister Gerald Klug said on Tuesday Austria would raise the total number of its peacekeepers to above 1,000 from 800 by sending an extra 230 soldiers to Kosovo and Bosnia and a handful of officers to the EU’s Central African Republic force. . . .

Foreign Minister Sebastian Kurz said he had wanted to raise the number of Austrian peacekeepers abroad quickly after taking office in December “to show we are serious about our international responsibilities. . . .”

Vienna withdrew its almost 400 peacekeeping troops from the Golan Heights last June during an Austrian national election campaign, saying spillover fighting from the Syrian civil war made their position too dangerous.