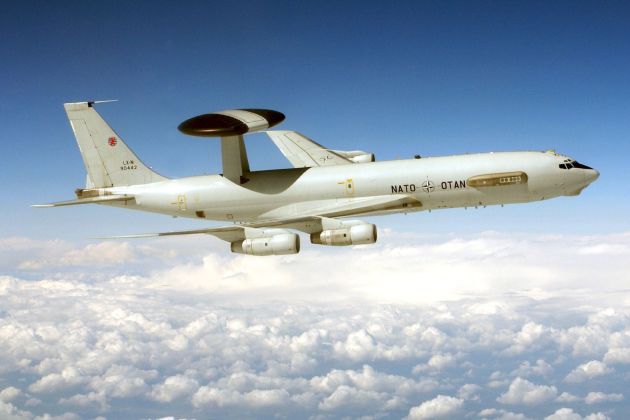 From Allied Command Operations:  NATO E-3A Airborne Warning and Control System (AWACS) aircraft from the NATO Air Base in Geilenkirchen Germany, are going to support Operation ACTIVE ENDEAVOUR (OAE), NATO’s maritime counter-terrorism operation in the Mediterranean , throughout the upcoming weeks.

The Boeing 707, with its advanced surveillance systems, is an excellent platform to produce and contribute to the overall understanding of ship movements in the area – what NATO terms the Recognized Maritime Picture (RMP). …

OAE, a network based operation which includes NATO and non-NATO force assets, demonstrates the Alliance’s resolve to help defend and protect against the broad terrorist threat using both maritime and supporting air capabilities within the Mediterranean area of operations.

OAE was launched in 2001 following the terrorist attacks against the United States. It has since evolved into a comprehensive counter-terrorism operation that is based on the collection and analysis of information of the maritime traffic and on the surveillance conducted by NATO naval and air units.   (photo: Allied Command Operations)