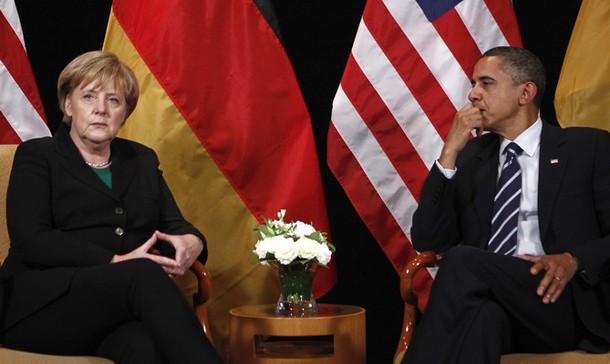 From John Vinocur, the International Herald Tribune:  There will be an interesting diplomatic moment at the White House next month when President Barack Obama presents the Medal of Freedom, the United States’ highest civilian distinction, to Chancellor Angela Merkel.

Just what do you say at a state dinner honoring the leader of an allied country that, against the instincts and commitments of France, Britain and America, declined to vote in favor of a U.N. Security Council resolution to protect Libyan civilians in rebellion against the dictatorship of Col. Muammar el-Qaddafi?

In February, before the Libyan uprising, the German U.N. abstention, and the allies’ efforts at interdiction, praising Mrs. Merkel’s embrace of liberty didn’t present a problem. Handing out the freedom medals for 2010 — Mrs. Merkel could not attend the event — Mr. Obama chose to quote her: “Freedom does not come about by itself. It has to be struggled for, and then defended anew, every day of our lives.”

Next month, the easy diplomatic course might be to toast Germany’s great democracy, its economic prowess and to let the rest lie — without any reference to a German strategic choice seemingly inspired by the government’s fear of the effect of Libyan intervention on a series of important regional elections this year.

But Mr. Obama’s dilemma is real. The postwar Germans, to their immense credit, are usually their own harshest critics. Should the president listen to them these days, some leading voices are becoming increasingly insistent in portraying the Merkel government’s inaction as a disaster.

Last week, Lothar Rühl, a former high-level Defense Ministry official, said Germany was now regarded in NATO as a “second-class” player, and called attention to his country’s absence from an open letter written by Mr. Obama, President Nicolas Sarkozy and Prime Minister David Cameron. He described its language as historically placing the Allies’ Libyan involvement “in a war for a just cause, even for ‘freedom.”’  (photo: Reuters)