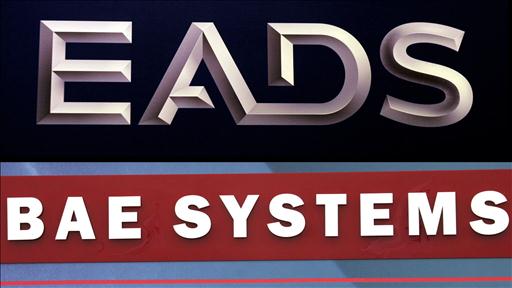 From Adrian Croft, Reuters:  Merging Britain’s BAE Systems with EADS to create a global aerospace and defence giant would be a significant boost to European leaders’ ambitions for a more efficient defence industry.

The European Union has long sought to foster more cross-national cooperation on defence projects in Europe to plug holes left by shrinking military budgets and to eliminate wasteful duplication of effort.

NATO too is urging members to work together on projects to squeeze maximum value from defence spending that many Western countries have slashed because of the financial crisis.

The combination of Britain’s BAE Systems and Franco-German dominated EADS to form the world’s biggest aerospace company could be a big step towards achieving those goals.

"We would welcome any reinforcement of the European defence industry and its competitiveness on the international stage," one European Union source said. . . .

The companies have combined sales of $93 billion, with products ranging from Airbus commercial planes to Typhoon warplanes and nuclear-powered submarines.

EU officials would not take an official position because of sensitivities around the proposed merger, which will need the approval of the EU’s competition watchdog. NATO declined comment, saying the proposed tie-up was a commercial issue.

The French and German governments have yet to make clear if they will back the merger and it could yet run into political obstacles over concerns about protection for jobs, defence of national interests, and the impact on competitors.

Under the proposed deal, special shares in BAE and EADS would be issued to each of the French, German and British governments to replace the British government’s existing "golden share" in BAE and the stakeholder deal that maintains a Franco-German balance of power in EADS.

The British government has said it is working with BAE and EADS to ensure the merger serves the public interest, but senior British lawmakers say Prime Minister David Cameron backs the deal. . . .

Defence experts say Europe still allocates a significant amount of money to defence but spends much of it wastefully. Despite European integration in other fields, defence has remained a largely national issue, with countries jealously guarding their competences and reluctant to depend on others. . . .

A combined BAE Systems and EADS could be a powerful driver for standardisation among the armed forces of Western Europe’s three biggest defence spenders, Britain, France and Germany.  (graphic: Getty)