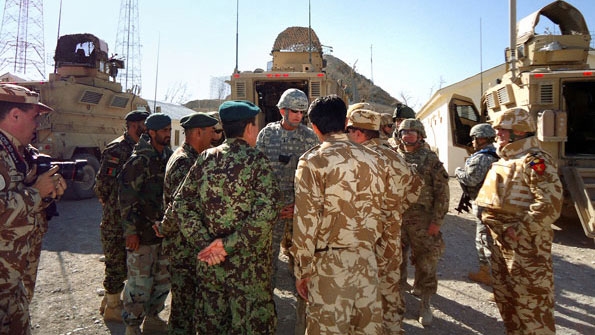 From the Economist:  Perhaps the least remarked upon part of the new strategy is the seemingly bleak future for American forces in Europe. . . .

The number of European-based American soldiers has already fallen from 213,000 in 1989 to only about 41,000 today. It has already been agreed that one of the US Army Europe’s four combat brigades will return to America by 2015. Its commander, Lieut-General Mark Hertling, has recommended a unit and a schedule. However, the Pentagon may now want more, running the risk of downgrading the United States European Command (EUCOM) into little more than a hollowed out headquarters. General Hertling says “there is a tension between the budget and national security and my worry would be that forces will be eliminated that ensure American interests are protected. Once eliminated, they are hard to regenerate. . . .”

The thinking behind the “rebalancing” looks flawed for several reasons. The first is that far from being on oasis of stability, EUCOM’s 51-country region covers some pretty flammable trouble spots, among them Georgia’s border with Russia, Kosovo’s border with Serbia and Turkey’s border with Iraq and Syria. Israel is also within EUCOM. There are less conventional security threats too, from terrorists moving between safe havens to cyber attacks.

The second is that—quite apart from possible flashpoints in its own region—Europe is closer to many of the fights that American forces may be committed to in the future than bases in the United States. US Army Europe currently has two of its four brigades in Afghanistan—the 170th Infantry Brigade in Mazar-i-Sharif and the 172nd Infantry Brigade in Paktika, one of the most violent provinces in the country. . . .

The third is that the new strategy places great emphasis on military-to-military co-operation with other countries. The best way of enhancing that is for American soldiers to train with their counterparts from other nations. General Hertling says that after training, the command’s second priority is to enter into effective partnerships with the many different countries in its region. “By sharing ideas, tactics and procedures,” he says, “you build trust with partners.” During the final readiness exercise before deployment to Afghanistan, the 172nd trained with troops from nine other countries, the same ones, notes the general, whom they would later find themselves fighting alongside. . . .

While the feeble defence effort of too many NATO members riles Americans, the organisation remains the only vehicle that reliably provides partners when America wants to do something and does not want to do it on its own. Mr Obama’s strategic guidance risks talking up the importance of partners while undermining the effectiveness of the command that does more than any other to make those partnerships work in America’s interest.   (photo: Economist)