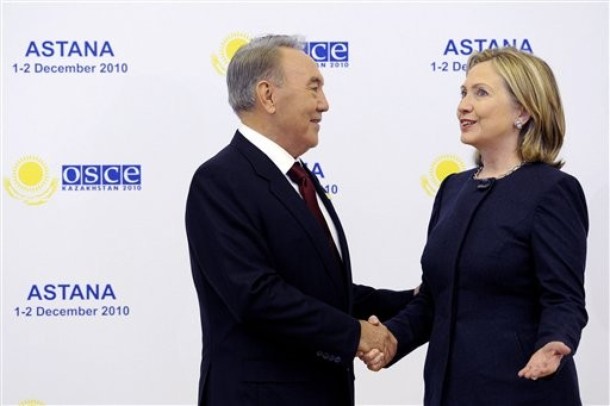 From Glenn Kessler, the Washington Post:  Belarus has agreed to give up its stock of highly enriched uranium, a critical fuel for nuclear weapons, the United States and Belarus announced Wednesday.

The deal with Belarus was revealed after Secretary of State Hillary Rodham Clinton met with Belarus Foreign Minister Sergei Martynov on the sidelines of a security summit here. The agreement would help eliminate a legacy of the Cold War, when stocks of nuclear material were abandoned on territories of former Soviet states.

"I want to publicly thank Belarus for the decision that has been made to eliminate the remaining stock of highly enriched uranium. This is a very significant, important step that Belarus has taken," Clinton said after the meeting.

A U.S. official, speaking on condition of anonymity, said the enriched uranium that Belarus will give up will total nearly 500 pounds, though he could not precisely say how much is weapons grade. …

Russia will take possession of the uranium, blending it with other material to make it less potent and appropriate for other uses, or securing it in some other way. …

The United States has led efforts to eliminate stockpiles of such nuclear material in former Soviet states. At the April summit, Ukraine announced it would dispose of its entire stock of highly enriched uranium. With U.S. assistance, Kazakhstan earlier this month secured approximately 100 tons of weapons-grade nuclear material by transporting it to a highly secure storage facility in the eastern part of the country. The material had the potential to make more than 770 bombs.  (photo: AP)