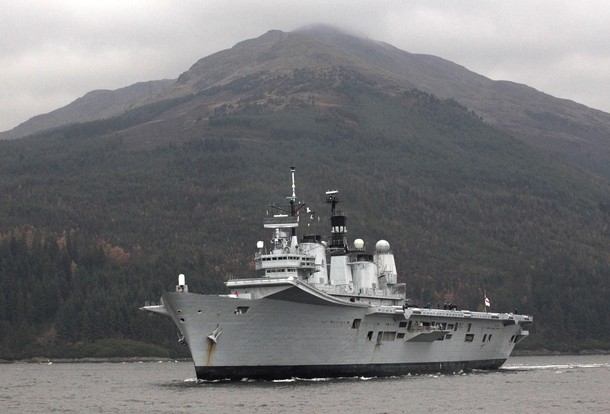 From David Manning and Franklin Miller, the Financial Times:  Rather than delay until the next SDSR in four years’ time, the government should explore three radical options about what to do with the second carrier.

The first is to offer the second carrier to Nato, designating it a Nato asset with the modifications and operational costs underwritten jointly by all Nato countries, in the way that the Alliance’s Awacs fleet is operated today. The Royal Navy could supply the crew, or the carrier could be manned by a multinational Nato crew. Cost-sharing, the crewing arrangements and deployment patterns would present challenges, but not insuperable ones. A month after the alliance reaffirmed its commitment to common defence at the Lisbon summit, this may be an idea whose time has come. Sharing a carrier’s costs would project Nato’s power in defence of the sea lanes and would be striking affirmation of its purpose. It would be a way of challenging Nato members whose defence spending falls short of the target of 2 per cent of GDP to take a fairer share of the strain. This option is one that Nato defence ministers could discuss at their meeting next March.

A second option would be to share the carrier with France. The UK/France summit in November at which David Cameron and Nicolas Sarkozy signed treaties pledging new defence co-operation might make this viable. The carrier would need to be configured to take French naval planes as well as JSFs; and both countries would need to agree that when either had its exclusively national carrier in refit the second carrier would be immediately available as a replacement.

A third option is sharing the carrier with America. The huge budget deficit confronting the Obama administration makes cuts to the US defence budget all but inevitable. The US navy’s carrier fleet is a likely target. One way of easing the strain on both US and UK naval budgets would be to share the second carrier, perhaps for a year at a time; perhaps with a UK starboard crew and a US port one. This would be a bi-national variation of the two-crew system currently used by each nation when deploying Trident submarines.

The writers are former UK ambassador to Nato and to the US, and a former senior US national security official.  (photo:  Reuters)