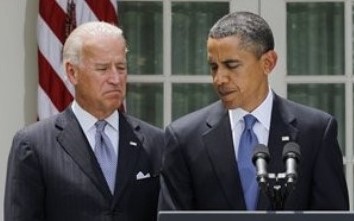 Obama, who has mandated the start of troop withdrawal in July 2011, has quietly encouraged his vice president to challenge existing assumptions about the war, even if it means rattling the military and the administration’s own officials.

“That’s what the president wants, and if he didn’t want [Biden] to do it, he’d shut it off,” Emanuel said. …

“Biden’s the voice of experience in the White House on this stuff,” said Leslie Gelb, president emeritus of the Council on Foreign Relations, who once co-authored a plan with Biden to divide Iraq into three ethnically based federal districts.

“Biden’s got far more experience than all of them over there in the White House put together — and experience is more important than intellect on foreign policy. For all his Biden-isms — and they are inevitable with Joe — he knows this business, and people can’t dismiss him very easily. …”

“He’s not off the leash,” says an official who has worked closely with Biden. …

Last fall, when word leaked that McChrystal would request as many as 80,000 new troops for a stepped-up counterinsurgency effort in Afghanistan, someone in the administration responded with a strategic counterleak: Biden was pushing for a scaled-down surge, accompanied by an accelerated effort to combat Al Qaeda with drones and troops along the Afghanistan-Pakistan border.

That leak publicly established Biden’s role as what a senior administration official calls “the in-house skeptic.”

Several officials told POLITICO the leak didn’t come from Biden’s office but from someone in the White House who wanted to make it clear that the McChrystal plan — backed by his boss Petraeus — was too radical. “It was a train headed 80 miles an hour, and it needed to be slowed down,” one official said.

Obama eventually opted for a middle path in a speech last December at West Point, when he announced a surge of about 40,000 troops, renewed counterinsurgency efforts against the Taliban and a new timetable for withdrawal.

The decision was portrayed as a defeat for Biden. But if Petraeus is unable to show significantly more progress than McChrystal did, many observers believe that Obama’s only choice will be to adopt some form of Biden’s scaled-down strategy.