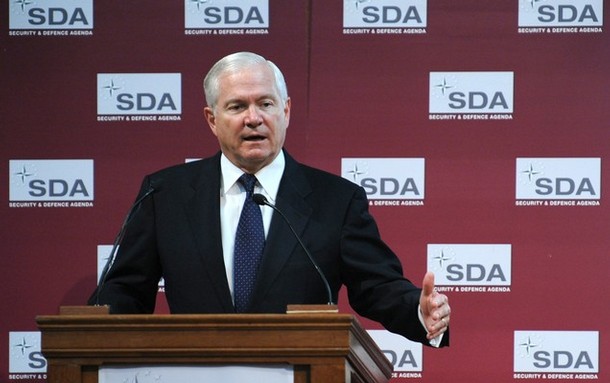 From the Editors of the Washington Post:  [Secretary of Defense Robert] Gates rightly blamed European governments for being “apparently unwilling to devote the necessary resources or make the necessary changes to be serious and capable partners in their own defense. ” He outlined “the real possibility for a dim, if not dismal, future for the transatlantic alliance.” And he offered three practical suggestions to avert disaster for Western defense: “making a serious effort to protect defense budgets from being further gutted;” “better allocating the resources we do have;” and “following through on commitments to the alliance and to each other.”

The secretary’s sermon was well-justified. But we couldn’t help wondering if the assembled European ministers would find some irony in his lessons. The Obama administration, after all, is pressing for big defense cuts of its own — up to $400 billion over the next dozen years, on top of savings of a similar amount already identified by Mr. Gates. That will mean, the Pentagon chief said in a speech last month, “a smaller military” that “will be able to go fewer places and do fewer things. . . .”

It may be that NATO has a dim future, but if so it’s not only because its smaller members are shirking their responsibilities. It’s also because its dominant member leader is eschewing its indispensable role of leadership.  (photo: Getty)