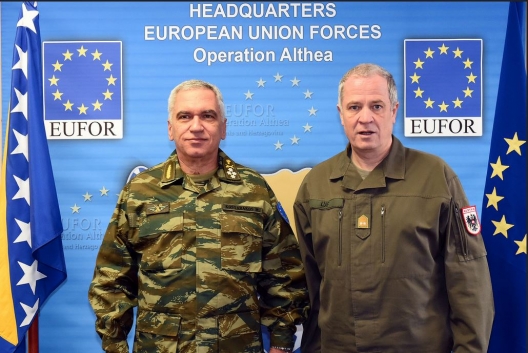 CSDP has played its part in trans-Atlantic and regional security. It has not delivered on the heady rhetoric of its formative years – e.g. the 60,000 troops available at 60 days notice and sustainable for up to a year in the field. But its military interventions and training missions in the Balkans and Africa, naval operations off the coast of Africa and in the Mediterranean, and its many civilian policing, border assistance and monitoring missions probably justify the cost and effort of setting it up. Along with the diplomatic and economic instruments available to member states they give the Union an almost unique potential to exert influence across the board.

But (and it is a big but) the continuing effort – and cost – of the military tool is not sustainable in the long term if the dysfunctional relationship with the Alliance persists. Ministers and ambassadors have repeatedly called for Turkey and Cyprus to allow the two organisations to work together as they should. And successive EU High Representatives and NATO Secretary Generals have done their best, meeting regularly, encouraging staff-to-staff contacts where possible below the political radar screen and attending each other’s ministerial-level gatherings. There is a measure of dialogue between the European Defence Agency and NATO’s capability planning command. But all this is no substitute for the construct for co-operation and co-ordination designed and agreed in the Nice Treaty fifteen years ago.

Under ‘Brexit’ the UK would no longer sit on the Council of Ministers, but the UK could offer to contribute, as other non-EU countries do, to EU-led operations and missions, participating in the ‘decision-shaping’ meetings of the Committee of Contributors. And the UK could probably negotiate an Administrative Arrangement with the European Defence Agency and contribute to EU capability initiatives (though not to EDA management decisions) should the UK so wish, although this would require agreement by the remaining participating Member States.

The most obvious and immediate risk of not having a UK voice in EU consensus-based decision-making is the prospect of others moving quickly to set up new military institutions in Brussels. Despite extensive lobbying and explanation over many years, other Member States have ignored the risks articulated by Albright, preferring to believe the rhetoric that the UK’s opposition is ideological and aimed at maintaining NATO (for which read US) primacy in all things military. They buy the argument that a permanent EU OHQ could be confined to a small ‘planning and conduct’ organisation of 40-60 military officers in the Kortenberg building in Brussels alongside the EU Military Staff. There will inevitably be further calls, following the deactivation of the OPCEN later this year, for permanent operational planning and conduct/command functions to be established in the European External Action Service/EU Military Staff.

The reality is that if a permanent EU version of SHAPE were to be established, and a European SACEUR-equivalent appointed, there would be inexorable pressure over time for a parallel planning and command structure to be set up to support the construct. Contingency planning for EU-led operations – no matter how slim the likelihood of significant increases in deployable military force and political will – would require the establishment of subordinate EU component commands across the continent and ultimately a defence planning process running parallel to that of NATO, all this with the attendant strains and potentially conflicting demands on resources, planning capacity and decision making for the countries that belong to both organisations. This was the clearly-perceived risk articulated by Albright and which prompted Prime Ministerial engagement in late 2003 and the Foreign Secretary’s one-man stand in the Council in 2011….

The presence of the UK in an area where consensus remains the rule has prevented CSDP from developing in ways that would be ultimately harmful to the Alliance. Our absence from the table would open the door to those less cognisant of the risks involved.

Sandy Johnston left UK government service in 2015 having spent more than half of a 37 year career advising and negotiating on European Defence, EU-NATO relations and UK-French bilateral defence co-operation. He represented the UK on the EU’s Politico-Military Working Group in Brussels between 2000 and 2006.