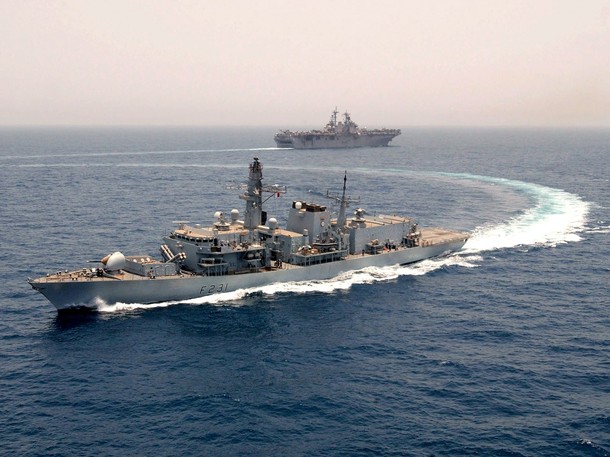 From James Kirkup, the Telegraph:  Defence sources have revealed that the Americans only relented and allowed a Royal Navy frigate to join the mission following an intervention from Nicolas Sarkozy, the French president.

Amid rising tensions in the region, the Royal Navy last month deployed HMS Argyll, a Type 23 frigate, to the Gulf.

The ship accompanied a US carrier strike group made up of an aircraft carrier with a full complement of fighters, a heavy cruiser and several destroyers.

A French frigate, the La Motte-Picquet, was also part of the flotilla which sailed through the Straits of Hormuz. Iran has staged wargames in the area and threatened to block the straits, a vital supply route for oil exports. . . .

British ministers initially signalled they would accept the Washington’s conclusion that did not need allies to take part.

But the British position changed after Mr Sazkozy insisted to the US that a French warship must be present in the flotilla.

Sources said that Philip Hammond, the defence secretary, concluded that if the French were sending a ship, Britain must do so too. His decision to was then endorsed by David Cameron, the Prime Minister.   (photo: Reuters)