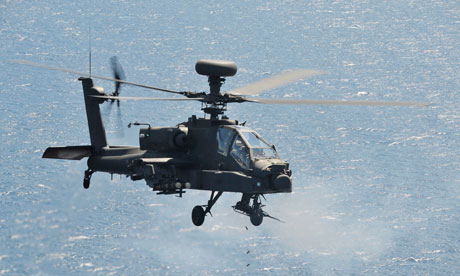 From the Telegraph:  The Daily Telegraph has learned that Apache helicopters will fly into Libya from a Royal Navy warship, in a joint operation with the French. . . .

The helicopter operation – expected to be supported by Special Forces troops – will take the allies closer still to a full ground operation in Libya.

Whitehall officials said that later this week, the Apaches will begin flying missions in from HMS Ocean, a helicopter carrier in the Mediterranean.

Their use was authorised by David Cameron at a meeting of the National Security Council after the Prime Minister asked military chiefs for new ways to increase the pressure on the Libyan regime. . . .

The Apaches, which carry Hellfire missiles and 30mm cannons, will target mortar batteries, light military vehicles and individuals including snipers and commanders. The helicopters have been highly effective in Afghanistan, targeting Taliban leaders and foot-soldiers in Helmand.

HMS Ocean is currently carrying three Apaches, whose crews have been practising for the Libyan operation in Cyprus. Another helicopter will arrive in the area later this week, and two more are on standby in the UK. . . .

The helicopters will help replace low-flying American gunships that were withdrawn from the operation in March by President Barack Obama, who arrives in London today for talks with Mr Cameron.

Officials said that Britain and France will continue to press Mr Obama to commit more US forces to the Libyan operation, although the president remains reluctant.

From Richard Norton-Taylor, the Guardian:  "We are very much behind the intensification of the military campaign and … so is France," said foreign secretary William Hague who was attending an EU ministerial meeting in Brussels.

"We certainly agree with France, and indeed with all our partners, including all our partners at the EU meeting , that it is necessary to intensify the military, economic and diplomatic pressure on the Gaddafi regime."

France’s foreign minister confirmed Paris had dispatched a dozen helicopters to add greater strike force to the campaign against Muammar Gaddafi in Libya.

Speaking in Brussels at the meeting of EU foreign ministers, Alain Juppe said that the 12 Tigre and Gazelle helicopters sent from Toulon on 17 May would enable "us to better adapt our ground attack capacity with more precise means of striking."

"Our strategy is to step up the military pressure in the weeks ahead while pushing at the same time for a political solution," said Juppe.