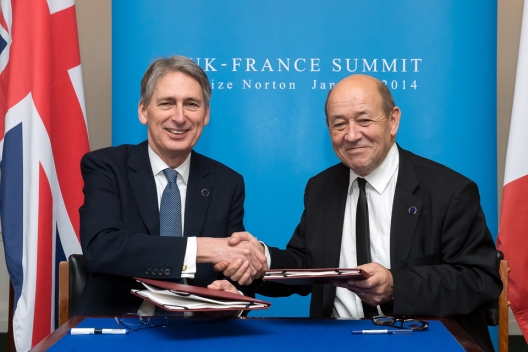 A communiqué signed by UK Prime Minister David Cameron and French President Francois Hollande sets out plans for closer ties between the 2 countries.

Building on the Lancaster House treaty signed in 2010, the agreements further the security and prosperity of the 2 nations through commitments to jointly invest in the procurement of defence equipment, the joint training of armed forces and the continued development of the Anglo-French Combined Joint Expeditionary Force.

Both countries have today signed:

a statement of intent for a future combat air system, which would launch a 2-year, £120 million joint feasibility phase that will see British and French industries working together

technical arrangements for our exchange programme to provide RAF pilots and engineers with experience of operating the A400M ahead of the delivery of the UK’s first aircraft later this year; and for French pilots to gain flying experience on the RAF’s A330 Voyager aircraft

a memorandum of understanding confirming joint orders for a future helicopter-launched, anti-surface guided weapon for our navies.

Agreements have also been reached that will see:

investment in the Atomic Weapons Establishment at Aldermaston, Berkshire, to allow collaboration on and safe testing of UK and French stockpiles and greater sharing of technical and scientific data to further joint research

Both countries also agreed to build on international peacekeeping missions carried out by their respective forces in Libya, Mali and the Central African Republic.

The 2 nations also agreed joint efforts to tackle security issues in north and west Africa, in particular terrorism, as well as drug and arms trafficking to achieve long term stability in the regions.

“Britain and France are natural partners for defence co-operation. We have made substantial progress since the Lancaster House treaty was signed in 2010 and today we have committed ourselves to go further still.”

“The agreements we have reached at this summit will improve the interoperability of our forces, enhance our joint equipment procurement and build on our capacity to support security and stability in places such as Libya, Mali and the Central African Republic.”