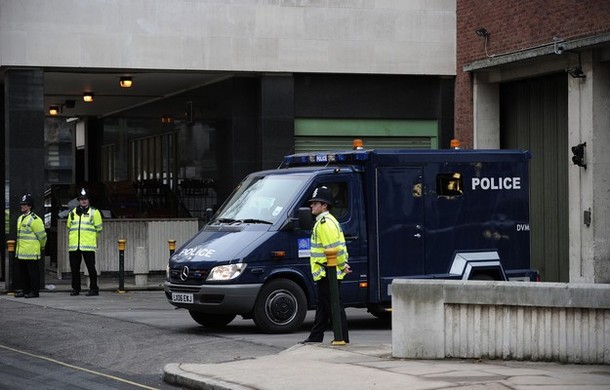 From Karla Adam, the Washington Post:  Nine of 12 men arrested last week in Britain on suspicion of planning a terror attack were charged Monday with conspiracy to set off explosions and testing potential bombs, police said.

The charges added to worries in Europe over reported preparations for a terror strike during the holiday season. Public concern was triggered by a warning last October from U.S. intelligence agencies, and further heightened by a string of recent terror-related incidents in several European cities. Some of the incidents were linked to Islamic militants, while others were allegedly the work of European anti-government radicals.

Adding to the jitters, police in Rome said they had defused an explosive parcel Monday outside the Greek embassy – the third such incident in a week. Last Thursday, an Italian anarchist group said it was responsible for parcel bombs that exploded at the Chilean and Swiss embassies in Rome, injuring two staff members. …

Between Oct. 1 and Dec. 20, the day of the arrests, the suspects were preparing for acts of terrorism, "researching, discussing, carrying out reconnaissance on, and agreeing [to] potential targets;" as well as "igniting and testing incendiary material," the police statement said.  (photo: Getty)

From Karla Adam, the Washington Post:  A U.S. State Department spokesman confirmed Monday that the U.S. Embassy in London was on the list of potential targets. "Our folks in London are aware of this, are working quite closely with British authorities, and appreciate the high level of cooperation that we have with them," said department spokesman Mark Toner. He added that embassy officials were taking "suitable security precautions."