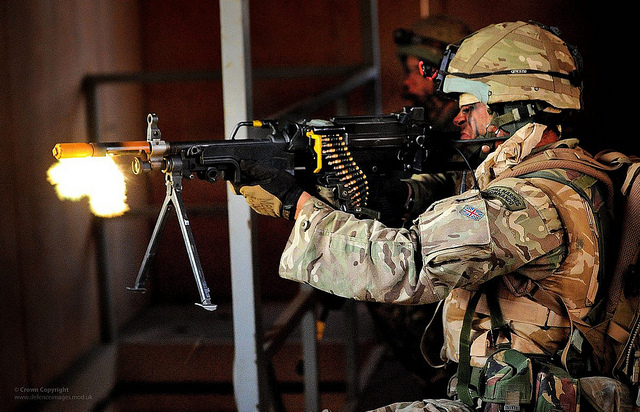 The proposal is the first official acknowledgment that Britain could keep forces in the province where nearly 450 troops have died in seven years of fighting.

Senior commanders are concerned the fledgling Afghan army will not be ready to face the Taliban on its own by the end of next year and a total pullout from Helmand risks squandering years of hard work.

They also worry a reluctance to draw up plans for Helmand after 2014 is undermining Afghan forces’ morale and weakening British influence in Kabul.

The proposal would see up to 200 British troops stay at Camp Bastion to work as advisers at the headquarters of the province’s Afghan army corps, senior military sources said.

Troops would be “inside the wire” and not fight, but would advise on planning, intelligence and logistics. Afghan generals also say they still want help organising airpower and medical care, where they are still nearly totally reliant on Western help. . . .

Another senior officer said: “This group would advise at corps level and provide a link to mentors we might want in Kabul in the Afghan ministry of defence.

“It needs to be part of a Nato plan obviously. The total numbers may be considerably less. It’s the function that’s important. . . .”

Until now, the Government has said it will only keep around 200 troops in Kabul after the end of 2014, as instructors at an officer training academy based on Sandhurst. . . .

Philip Hammond, Defence Secretary, said Britain must wait for America to draw up its own post-2014 plans before making any decision about other troops.

A decision is unlikely before the end of the year when Washington is due to finish lengthy security pact negotiations with Hamid Karzai, the Afghan president. . . .

An MoD source added: “NATO has yet to decide what assistance may be needed once combat operations end in December 2014 and the UK has not received any requests over and above the running of the Afghan National Officer Academy.”