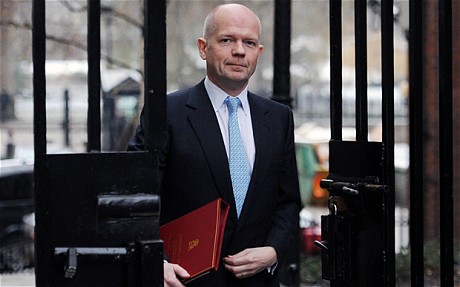 From Duncan Gardham and Andrew Osborn, the Telegraph:  William Hague, the Foreign Secretary, said in a written statement that the government had asked the Russian embassy in London withdraw a member of their staff from Britain on December 10.

He said the request was "in response to clear evidence of activities by the Russian intelligence services against UK interests."

"They broke the rules of the game," a security source said. "Once we detected what they were doing we had no other option than to act. It’s just not on. …"

"There is a huge Russian intelligence operation in the UK and all over the world which is both active and assertive but in this case they have crossed a line and it needed a response," he added. …

The spying was said to be conducted by the "Russian machinery" and the person expelled was one of a number who were taking part. …

Russia responded in a tit-for-tat move to the latest expulsion on December 16 by requesting the removal of a member of the British Embassy staff in Moscow.

"We reject any basis for this action," Mr Hague said, but added: "Both staff members have now been withdrawn."  (photo: PA)