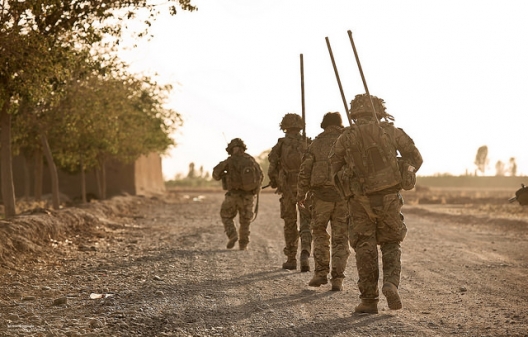 A future Conservative government could cut spending on the Armed Forces to below two per cent of the country’s budget, David Cameron has admitted.

The Prime Minister refused to pledge to maintain funding at its current level of two per cent of GDP, the target set by Nato, saying the military would not be protected from cuts necessary following the general election. . . .

Speaking on the BBC’s Andrew Marr Show, Mr Cameron repeatedly refused however to rule out cuts to the military budget, saying: “Let’s see how these things develop, that’s going to depend on the decisions we make, on what happens with the economy.”

Last month, Lieutenant-General Ben Hodges, one of the United States’ top generals, warned that the UK could be left unable to cope with growing threats from abroad if spending fell below the Nato target.

Military spending has already been cut by eight per cent in real terms since the Coalition came to power, and the Royal United Services Institute has predicted it will fall further, to 1.88 per cent of GDP, in the next financial year. . . .

Saying that there were “four months this year to save Britain’s economy” before the general election in May, the Prime Minister defended the Coalition’s decision to impose severe belt tightening on the Armed Forces, saying: “Defence is a very good example of how this government has shown competence in delivery.