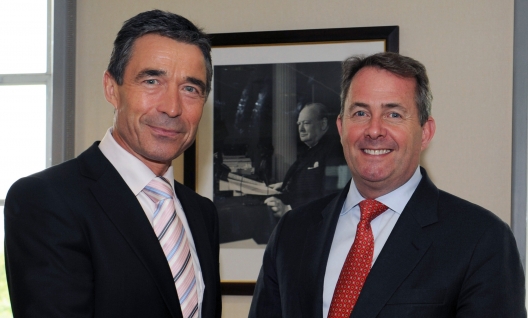 Liam Fox is being tipped as the next Secretary General of Nato more than two years after he quit the Cabinet.

Senior Tories say the former Defence Secretary’s name is ‘on the table’ in Downing Street as a leading candidate for the role.

The current Nato boss, Denmark’s Anders Fogh Rasmussen, is due to stand down after the Nato summit in Wales this September. . . .

David Cameron has not yet decided who Britain will back for the role when discussions on the post are held in July.

But senior Tories close to Downing Street say that Dr Fox, a firm supporter of the Atlantic Alliance, would be a strong contender.

‘Liam knows the key people already,’ said one source. ‘He’s probably Nato’s biggest supporter in the Commons and he has another big job in him.’

Others suggest that handing the role to Dr Fox would allow Mr Cameron to reward his loyalty since his resignation and remove him from frontline British politics where his calls for more robust action in the EU are seen as potentially awkward for the Prime Minister.