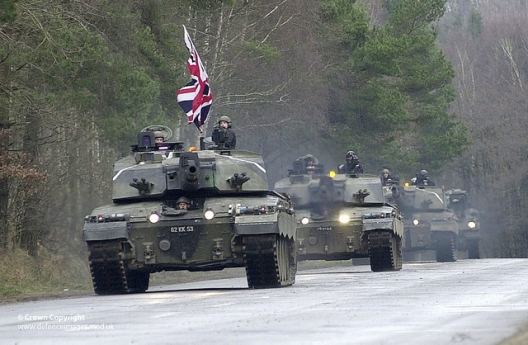 Britain has offered Nato an armoured battle group including up to 25 tanks to join exercises in Poland as a show of force against Vladimir Putin.

The deployment would see as many as 1,000 British soldiers join Nato forces for war games across the border from Ukraine later this year.

The offer was disclosed as David Cameron prepares to meet the Russian president on Thursday and wrangling over the Ukraine crisis seems certain to dominate world leaders’ visits to the D-Day anniversary events. . . .

Army sources said Britain had offered a range of proposals to Nato chiefs, including sending heavy armour to join exercises this autumn.

One source said: “We have offered a whole range of capabilities and one is a battle group with heavy armour. It’s all scoping at the moment and we are waiting to see what Nato wants from us.”

The armoured battle group could contain as many as 25 tanks and 40 Warrior fighting vehicles, as well as artillery, sources said. Other options include sending purely infantry and lighter vehicles.

Such a force would be by far the UK’s biggest response yet to the Ukraine crisis. It follows four RAF Typhoon fighter jets being sent to reinforce Nato airspace patrols over the Baltic states and around 100 British soldiers joining an exercise in Estonia.