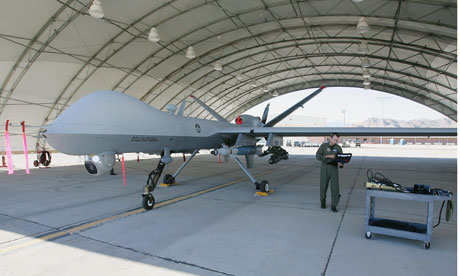 From Nick Hopkins, the Guardian:  The British military is increasingly relying on unmanned drones to wage war against the Taliban, and has fired more than 280 laser-guided Hellfire missiles and bombs at suspected insurgents, new figures reveal.

In the past year alone, the remotely controlled Reaper aircraft have flown more than 11,000 hours over southern Afghanistan and attacked targets with 105 high-impact precision weapons.

But the use of the drones, which are flown by RAF pilots from a US air force base in Nevada, is raising fresh concerns among human rights lawyers and MPs.

The Ministry of Defence says only four Afghan civilians have been killed in its drone strikes since 2008. However, it also says it has no idea how many insurgents have died, because of the "immense difficulty and risks" of verifying who has been hit.

Instead, the MoD says it relies on Afghans making official complaints at military bases if their friends or relatives have been wrongly killed – a system campaigners say is flawed and unreliable. . . .

The UK has been using drones in Afghanistan for the past four and a half years, having bought six Reapers from the US as part of an ‘urgent operational requirement’.

The RAF currently uses five Reapers on constant rotation to support Nato’s military campaign, and is providing 36 hours of coverage every day. This means two drones are in use much of the time.