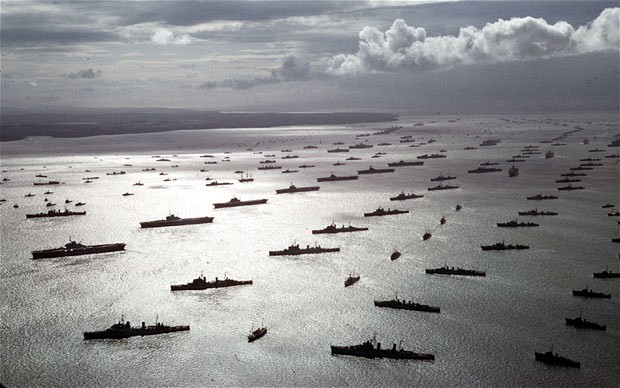 From Neil Tweedie and Thomas Harding, the Telegraph:  Britain is celebrating only the second diamond jubilee in its history. The occasion calls for a naval review, a staple of coronations and other great moments in the life of the nation, but it is not to be. The Royal Navy, the country’s saviour in two world wars, is a sorry shadow of its former self, so depleted by successive rounds of cuts that it can no longer muster a dozen ships for the occasion. So embarrassed are the ministers and civil servants at the Ministry of Defence who have overseen these disastrous reductions that they have quietly drawn a veil over the issue, hoping no one will notice the absence of a major role for the Senior Service in this week’s celebrations.

A serving commander in the Royal Navy, recently returned from operations, says the MoD has made it clear that no comment is to be made in public on the subject. “It would have been just too embarrassing,” he says. “There aren’t many ships and those we do have are a long way away. It was just too difficult to mount a spectacle worth having.” Lord West, a former First Sea Lord, the professional head of the Navy, says an attempt to stage a review would result only in national humiliation. “I suppose now we could get a couple of submarines out and five or six frigates and destroyers, but it would be very small and not very splendid,” he says. “That gives one a feel for how things have changed. Because the number of ships has reduced so dramatically the event would be too small to make a meaningful and sensible fleet review.”

The Queen and Duke of Edinburgh, a career officer before marriage, must look back ruefully on June 15 1953, when they boarded the frigate Surprise to review the armada gathered off Spithead to mark the Coronation. The Navy was anything but short of carriers then, benefiting from the surge in construction during the Second World War. Eagle, Indomitable, Illustrious, Theseus and Perseus, lined the way, together with Canada’s Magnificent and Australia’s Sydney. Other carriers were away on operations, from the Mediterranean to the Far East. In all some 300 ships, cruisers, destroyers, frigates and minesweepers, took part in the review, overflown by some 300 aircraft of the Fleet Air Arm.

The fleet had shrunk dramatically by the silver jubilee of 1977 but was the third biggest behind the navies of the United States and Soviet Union. Two aircraft carriers, including Ark Royal, attended, with two cruisers, one assault ship, 17 destroyers, 18 frigates, 14 submarines and a host of minor vessels and auxiliaries. There was no need to flesh out the review with foreign vessels, just 18 attending.

And today? Allowing for inflation, Britain’s GDP is four times greater than in 1953 but the country appears incapable of maintaining a viable fleet. Today it comprises two helicopter carriers, 1 active assault ship, six destroyers, 13 frigates, 42 minor vessels and 13 auxiliaries. Take away escorts on operations or in refit and the Navy would, as Lord West says, struggle to field more than a handful for a review. But one thing our increasingly Ruritanian fleet is not short of is admirals. There are 28 full, vice and rear admirals, one per major combat unit, surely the most over-managed structure in the country. . . .

In contrast, the navies of Brazil, Russia, India and China, are growing. Last year the Indian navy staged its presidential fleet review off Mumbai. There were 81 vessels, 10 more than the entire Royal Navy, including the carrier Viraat (ex British carrier Hermes). She still flies Sea Harriers, giving India a lead over its former naval mentor.  (photo: Popperfoto/Getty)  (via @samlagrone)