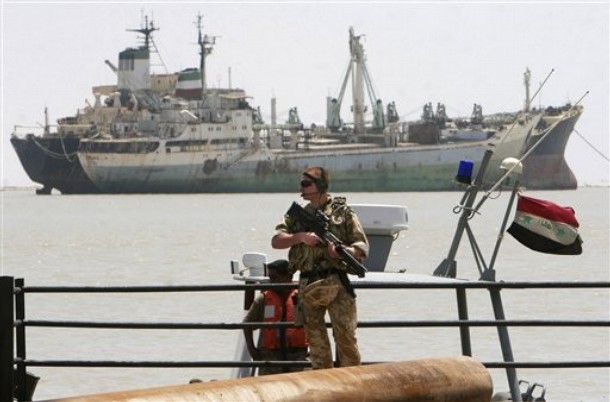 From Lara Jakes, the AP:  The last of Britain’s military forces in Iraq pulled up anchor Sunday, ending more than eight years of fighting militants and training security forces since invading in 2003.

Eighty-one Royal Navy sailors turned over the task of patrolling waters off the southern port city of Umm Qasr on the Persian Gulf to Iraq’s fledgling navy. It was the last hands-on mission that British troops had in Iraq since combat forces pulled out of the southern city of Basra in July 2009.

Brig. Gen. Max Marriner, commander of British forces in Iraq, cited dramatic security gains across the country, and particularly in the south, that he said British troops helped make happen. . . .

A small number of British defense officials will continue to work at the embassy in Baghdad, and 44 British military personnel also will remain in Iraq as part of the NATO training mission at the Iraqi Military Academy at a base in the capital’s south.  (photo: AP)