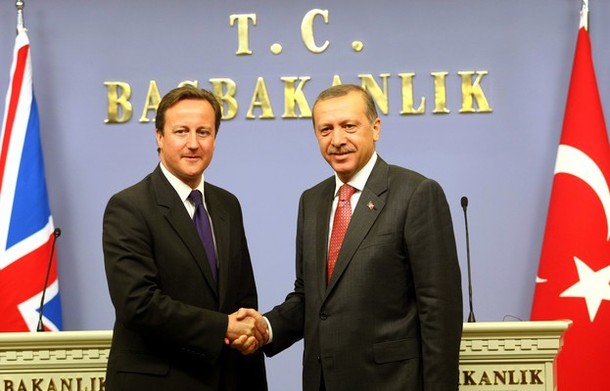 From David Cameron, British Prime Minister’s Office:  When I think about what Turkey has done to defend Europe as a NATO ally and what Turkey is doing today in Afghanistan alongside our European allies it makes me angry that your progress towards EU Membership can be frustrated in the way it has been. My view is clear. I believe it’s just wrong to say Turkey can guard the camp but not be allowed to sit inside the tent.

So I will remain your strongest possible advocate for EU Membership and for greater influence at the top table of European diplomacy. This is something I feel very passionately about. …

I also encourage Turkey to maintain its efforts to achieve the ambition of zero problems with all its neighbours, including Iraq. And I welcome the important work Turkey has done in recent months to improve regional co-operation in the Western Balkans. Again it’s your unique relationships and influence in the region which can play such a vital role in helping to bring about progress and reconciliation. …

But we want you to push forwards aggressively with the EU reforms you’re making. We want you to take the necessary measures to open the Competition chapter, as the next step in the accession process. Because just as countries draw great strength from the openness of their societies, so Europe will draw fresh vigour and purpose from a Turkey that embraces human rights and democracy.

And we want you to continue to work towards a solution in Cyprus, despite our disappointment that a huge effort six years ago was unsuccessful.