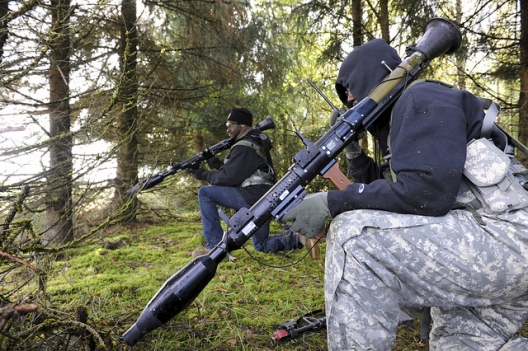 If Ukraine has to be supported so that it does resist, the Ukrainians have to know the West is prepared to help them resist. And there’s no reason to be secretive about it. It would be much better to be open about it and to say to the Ukrainians and to those who may threaten Ukraine that if Ukrainians resist, they will have weapons. And we’ll provide some of those weapons in advance of the very act of invasion. Because in the absence of that, the temptation to invade and to preempt may become overwhelming. But what kind of weapons is important. And in my view, they should be weapons designed particularly to permit the Ukrainians to engage in effective urban warfare of resistance. There’s no point trying to arm the Ukrainians to take on the Russian army in the open field: thousands of tanks, an army organized for the application of overwhelming force. There is a history to be learned here from urban resistance in World War II and most recently in Chechnya, whose capital persisted for three months in house-to-house fighting. The point is, if the effort to invade was to be successful politically, it would have to incorporate taking the major cities. If the major cities, say Kharkiv, say Kiev, were to resist and street fighting became a necessity, it would be prolonged and costly. And the fact of the matter is—and this is where the timing of this whole crisis is important—Russia is not yet ready to undertake that kind of an effort. It will be too costly in blood, paralyzingly costly in finances. And would take a long time and create more and more international pressure.

Accordingly, I feel that we should make it clear to the Ukrainians that if they are determined to resist, as they say they are and seemingly they are trying to do so (albeit not very effectively), we will provide them with anti-tank weapons, hand-held anti-tank weapons, hand-held rockets—weapons capable for use in urban short range fighting. This is not an arming of Ukraine for some invasion of Russia. You don’t invade a country as large as Russia with defensive weaponry. But if you have defensive weaponry and you have access to it and know it’s arriving, you’re more likely to resist. And hence that acts as deterrent and that, in turn, can permit them more effective operations to terminate some of the violence that is being sponsored on the borders between Ukraine and Russia. That, I think, would help in any case to contain the risk and the temptation to resolve this issue by force of arms. On the Russian side, given the great ecstasy over the Crimean success which was quick and decisive and which encountered no resistance, the temptation to seek its repetition can be quite appealing to a political leader who desperately needs a major success.

However, at the same time we need to engage in some exploration of possible arrangements for a compromise outcome. Especially if it becomes clear to the Russians and to Mr. Putin that either destabilizing Ukraine or taking it by force poses great risks and may not be attainable. Deterrence to be accompanied, therefore, by an effort to engage in dialogue. What should be the formula for such a possible compromise? I think it’s relatively simple: Ukraine can proceed with its process, publicly endorsed by an overwhelming majority of the Ukrainian people, of becoming part of Europe. But it’s a long process. The Turks have been promised that outcome, and they have been engaging in that process already for 60 years. In other words, it’s not done very quickly. Therefore, the danger to Russia is not imminent and the negative consequences are not so destructive.

But at the same time, there should be clarity that Ukraine will not be a member of NATO. I think that is important for a variety of political reasons. If you look at the map, it’s important for Russia from a psychological, strategic point of view. So Ukraine will not be a member of NATO. But by the same token, Russia has to understand that Ukraine will not be a member of some mythical Eurasian Union that President Putin is trying to promote on the basis of this new doctrine of a special position for Russia in the world. Ukraine will not be a member of the Eurasian Union, but Ukraine can have a separate trade agreement with Russia, particularly taking into account the fact that certain forms of exchange and trade are mutually beneficial. Agricultural products, for example, from Ukraine to Russia. Industrial products that Russia needs and are being produced in Ukraine. Not many people realize that some of Russia’s best rockets, most of the engines for Russian civil aviation, and some of the rockets used by the United States, are produced in Ukraine. It’s a profitable and successful industrial enterprise. And that therefore should be continued under an arrangement whereby Ukraine and Russia have a special treaty.

I think something like this might actually at some point become appealing. And it should be surfaced in the context of an open, not covert, effort to convince the Russians that any use of force will have negative, but enduring consequences for Russia itself, not involving a threat to Russia’s security, but involving rising costs of the assertion of Russia’s power at the cost of Ukrainian independence. In my view in that context, NATO should also act somewhat more assertively in reducing the insecurity of those NATO countries that border on Russia and happen to have Russian nationals who constitute on the average about 25% of their populations. I speak specifically of Estonia and Latvia. America has committed its military presence there. I would think it would be very productive if, in addition to America, some leading European states, notably Germany, France, and Great Britain, deployed some symbolic forces in these three countries. So that they’re there too, and not just Americans, on a regular basis. This would reaffirm the fact that NATO stands together. In international politics, symbolism is as important as decisiveness and can avert the necessity for extreme measures.

Given the current consequences of the very massive expansion of NATO in the last several decades to 28 members, it might be also appropriate in the light of the ongoing experience to take another look at the structure of NATO itself. I have in mind, particularly, a review of the historical paradox involved in the very important Article 5. Article 5 provides for the procedure in undertaking a military response to an aggression directed at it in general or at one or two or more of its members. You doubtless recall that Article 5 has a provision that decisions to engage in hostilities by the alliance have to be unanimous. This, in other words, means that every country has a veto. It was the United States that insisted on this provision when NATO was first formed. It insisted on it in order to obtain popular support for NATO in the American congress from the isolationist portions of the American body politic. They feared that an alliance of this sort would violate the American tradition of no foreign entanglements. Unfortunately today, with 28 members of varying degrees of genuine political commitment to some of the security assumptions of the alliance, the situation has become reversed. It is some of the new allies that may be tempted in certain circumstances to invoke Article 5. A unilateral veto would not entirely prevent NATO from responding, because I am convinced if that were to happen after prolonged debates, much resentment, internal threats, the country concerned would be persuaded to join or de facto ejected out of the alliance.

One possible solution might be simply the adoption of the provision that there will be no veto right in the alliance for sustained, enduring under-performers of jointly agreed commitments. Some members of NATO don’t meet their commitments even by remote approximation, and hence their membership in NATO is a free ride all together. Why should a member that doesn’t meet NATO commitments practically in total then have the right to veto the other members’ right to engage in collective self-defense? It’s an anomaly and potential source of gridlock and confusion. As this crisis is gradually resolved, I hope NATO will take another look at it and will also take a look at the issue of additional new members in NATO more critically. It doesn’t follow that a country whose security NATO has an interest in has to be a NATO member. NATO can have an interest in its security, but without having it in NATO. There is some talk of new members in the EU. And perhaps some of these will seek NATO membership, and in recent years some countries have obtained a NATO membership while being territorially remote from the possible conflicts on the East-West dividing line. I think more discretion here may be actually beneficial and some reflection on the subject might in fact enhance NATO credibility and create some pressure on those members who wish to be active members in NATO to do more to meet the commitments they have formally undertaken.

Excerpts from “Mutual Security on Hold? Russia, the West, and European Security Architecture,” by Dr. Zbigniew Brzezinski at the Wilson Center, June 16, 2014.