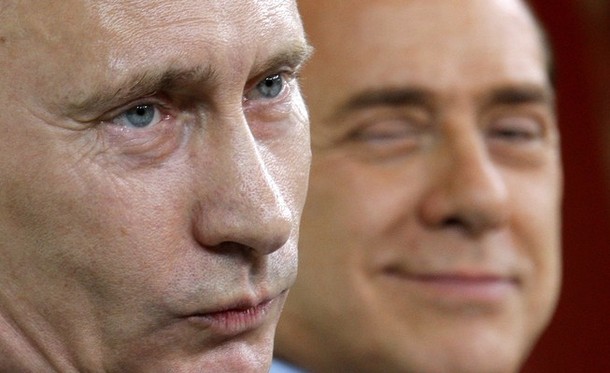 From Jim Heintz and Alessandra Rizzo,  the AP:  The cable most critical of [Italian Prime Minister Silvio] Berlusconi from the U.S. Embassy in Rome portrays him as essentially acting as a European mouthpiece for [Russian President Vladimir] Putin.

"His overwhelming desire is to remain in Putin’s good graces and he has frequently voiced opinions and declarations passed to him directly by Putin," the communique says.

In part, the cable says, that reflects Italy’s reliance on Russian gas. The energy-hungry country imports about nine times more gas than it produces, and Russia is a major supplier.

"In its relation with Russia, energy is the most important bilateral issue and the quest for stable energy supplies from Russia frequently forces Italy to compromise on security and political issues," it says.

Such apparent compromises include support for "[Russian Prime Minister Dmitri] Medvedev‘s plans to redefine European security architecture to undermine the OSCE and NATO" and Italian opposition to NATO efforts to improve ties with Georgia and Ukraine, the cable says.

But the report also suggests Berlusconi is emotionally and financially enriched by close relations with Russia. Berlusconi is believed to "admire Putin’s macho, decisive and authoritarian governing style, which the Italian PM believes matches his own," the cable said.

In addition, the cable says contacts from within Berlusconi’s party and from an opposition party "hinted at a more nefarious connection. They believe that Berlusconi and his cronies are profiting personally and handsomely from many of the energy deals between Italy and Russia."  (photo: Reuters)