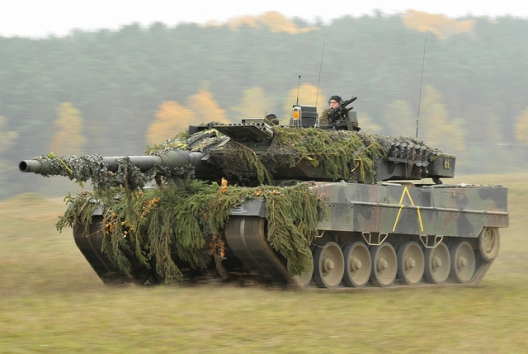 [A] chorus of leading German politicians is saying the Ukraine conflict calls for boosting military spending—until recently, a political taboo. Germany’s defense minister announced in late February that the armed forces would stop junking good equipment to improve military readiness. More than 40 tanks that had been slated to be decommissioned will soon form a new armored battalion in northern Germany.

Russia’s more aggressive foreign policy has sharpened the focus on national defense across Western Europe, as North Atlantic Treaty Organization leaders have urged member states to strengthen their militaries. But nowhere has the shift been as dramatic and as intensely debated as in Germany, a country whose postwar aversion to military confrontation—particularly with Russia—has been a core element of political culture.

“The developments in Ukraine have opened the eyes of many,” said Henning Otte, a member of parliament and the spokesman for defense issues for Chancellor Angela Merkel ‘s conservative bloc. “This is about deterrence. We are making it clear that it’s not worth it to attack a NATO member.”

“Given the many crises and instabilities in the world, we will of course have to shoulder higher payments for defense in the coming years,” German Finance Minister Wolfgang Schäuble said in an interview published in the Bild am Sonntag last week.

Defense Minister Ursula von der Leyen—who just over a year ago became the first woman to take the post in Germany—laid out the first steps to reverse years of whittling down the military late last month.

“Superfluous good equipment” will no longer be given away or scrapped, she said, adding that the reduction of the Leopard 2 tank arsenal was now under review.

The new tank battalion being formed will be stationed in the north German town of Bergen at a military base being vacated this year by British troops.

The move, Ms. von der Leyen said, will help Germany shoulder its responsibilities in NATO’s response to the Ukraine crisis amid fears that Russia could interfere militarily in the Baltic states, which also are NATO members. Germany is one of the three countries leading a new rapid-response force that is able to deploy within days to the eastern borders of the alliance.

“We have a remarkably hard year behind us, but it has also opened our eyes,” Ms. von der Leyen said. “We want to adjust quickly to the changed parameters….”

Manfred Güllner, head of Berlin-based pollster Forsa, said many Germans equate a bigger military with higher risk of warfare. They “would rather have the military not be operational and stay at home,” he said.