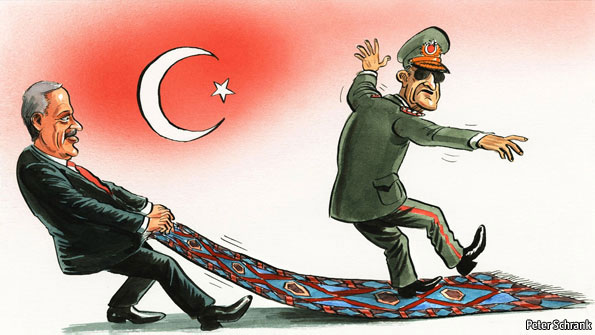 From the Economist:  Turkey’s prime minister, Recep Tayyip Erdogan, has cast the [proposed constitutional] reforms as a stab in the heart of the September 1980 coup plotters. The referendum falls on its 30th anniversary. But Mr Erdogan’s critics view the changes as a final assault on Ataturk’s secular republic.

For the common voter the referendum boils down to a popularity contest between the ruling AK party and the main opposition Republican party (CHP), which sees itself as the custodian of Turkey’s secular heritage. Polls suggest that the race will be tight, with “yes” votes prevailing by five to six percentage points. The campaign has become polarised. “Yes” campaigners have been pelted with eggs. A youth wearing a “no” T-shirt was beaten by police.

AK has been steadily trimming the army’s powers since taking power in 2002, and many of the proposed amendments take aim at the generals: coup plotters will henceforth be tried in civilian courts and civilians will no longer be tried in military ones. Officers booted out by the army for their political views will be able to seek legal redress. Turkey’s secular elite see the army as their last line of defence against what they fear is encroaching Islamism under Mr Erdogan’s rule. The opposition has been playing on these doubts. One CHP billboard, featuring a chador-clad figure, called on voters to vote no “if you don’t want to be forced to dress like nuns”.

At the core of the package is a controversial overhaul of the judiciary, which AK accuses of deferring to the generals. The opposition’s line is that having defanged the army, AK is now bent on asserting its control over the law. Over the years Turkey’s prosecutors have banned dozens of parties (mostly Kurdish ones). In 2008 AK itself narrowly escaped being shut down on the thinly supported charge that it was seeking to introduce sharia rule.

Under the proposed changes party closures will have to be approved by parliament, and membership of the constitutional court will be expanded, giving parliament and the president greater say in its composition. At present senior judges get to vet candidates, “thereby ensuring,” argues Osman Can, a former constitutional-court rapporteur, “that only like-minded Kemalist members get promoted and their militarist mentality perpetuated”.  (graphic: Peter Schrank/Economist)