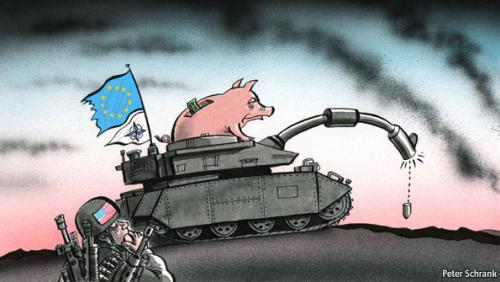 From Sara Miller Llana, Christian Science Monitor:  If after World War II and into the cold war the US once jealously guarded its dominance in transatlantic affairs, today it wants Europe to take care of Europe and its neighborhood. With the US "pivoting" toward Asia and facing budget cuts at home, Washington has increasingly called on Europe to safeguard itself – and, more important, the nearby territory of the Sahel, North Africa, and parts of the Middle East.

But the interventions in Libya and Mali have shown the limits of Europeans at the military helm. In Libya, the US ultimately provided 80 percent of aerial tankers, because of limited ally capabilities. Instead of instilling confidence that Europe can act without the US in the lead, military experts are increasingly worried about the holes and gaps that shrinking defense budgets and ambitions are creating.

Now Europe is scrambling to define its military capabilities and strategy at a December European Council summit focused on defense for the 28 heads of state. Though the task will test the will of the EU to overcome deeply entrenched cultural differences and deficits in military might – especially among the "big three" of France, Britain, and Germany – if it succeeds, a capable European corps could give the US greater freedom to concentrate on its direct strategic interests elsewhere in the world. . . .

Because no country can lead Europe alone, all agree that little can be accomplished if the big three don’t get on the same page.

It is Britain and France that are the natural leaders on defense in Europe. They both have permanent seats on the Security Council, nuclear-weapon capabilities, and colonial legacies that shape their visions of their roles in the world. Germany is part of the trio simply because of its economic might.

Together, the three represent 60 percent of the EU’s military expenditures, but they don’t align easily. "The Brits are immensely serious about defense, but are not particularly interested in Europe," says Francois Heisbourg, a defense analyst in Paris. "Conversely, Germans see themselves to be good Europeans but are rather not interested in defense. The French are somewhere in the middle of that spectrum."

France would be best poised to bridge those two sides. While Britain has the biggest military in Europe, it is undergoing massive budget cuts and increasingly questioning whether it even wants to be part of the EU project. It aligns more readily with the US on defense than with its European counterparts.

France, on the other hand, has long been a leading proponent of deeper European defense integration, which comes in part from historical distrust of American-dominated NATO but also the confluence of its commitment both to Europe and defense. . . .

Questions over defense come as France’s role as a leader in Europe has been eclipsed by Germany – though whether Germany can rise as the new power broker on defense is unclear.

It is the only country of the big three not facing serious defense cuts, and if trends continue, it could emerge as the biggest military in Europe. But it would have to overcome decades of aversion to military intervention and leadership on foreign policy, a legacy of the shadow of Nazi Germany.

At the end of 2011, Poland’s foreign minister, Radek Sikorski, startled Germany when he said in a speech in Berlin: "I will probably be the first Polish foreign minister in history to say so, but here it is: I fear German power less than I am beginning to fear German inactivity."

Markus Kaim, a defense expert at the independent government-funded German Institute for International and Security Affairs, was sitting in the room and says the feeling of discomfort was palpable. "We are not used to expectations of ‘please lead us now,’ " he says. . . .

The foreign service wing of the EU, called the European External Action Service, was established by the Lisbon Treaty of 2009 to make Europe more of a global player. If NATO is a military "service provider," then the EU is the soft power machine.

But many say Europe needs much more than that to remain relevant. In May, NATO Secretary-General Anders Fogh Rasmussen made headlines when he said that there cannot be credible EU foreign policy without the military means to back it up. "We Europeans must understand that soft power alone is really no power at all," he said.

For [director of Carnegie Europe Jan] Techau, the statement speaks to shortcomings in the EU’s role in foreign-policy strategy. "We pride ourselves on strong diplomacy, but it depends on having the muscle to back it up," he says. Despite all of the donor support Europe has provided in the Middle East, he says, it is only the US that ultimately has political pull. "It’s because [Europe] can’t put its fist on the table. If you don’t have a hard power security guarantee, you can’t move people."   (graphic: Peter Schrank/Economist)