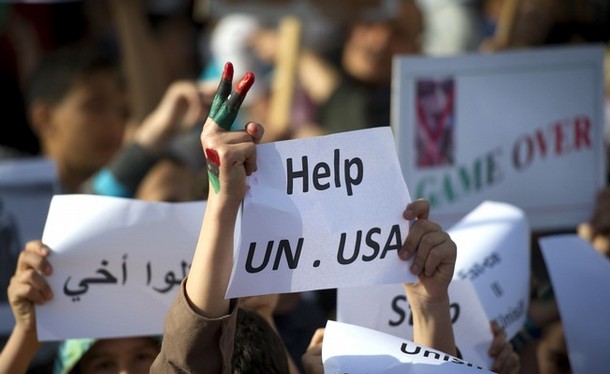 From the Economist:  NATO’s problem is that it currently lacks both the means and the mandate to do much to help Misrata. Loyalist snipers in buildings across the city cannot be taken out from the air without killing civilians nearby. It is tricky even to go after the mortars (some of which are firing cluster munitions, according to the New York-based Human Rights Watch) and the Grad rockets being fired from outside the town. Compared with a tank or heavy artillery, they represent a tiny and easily hidden target. Yet a single Grad multiple launcher can fire a salvo of 40 (highly inaccurate) rockets.

To have some effect against such dispersed targets, NATO requires some combination of sophisticated (special forces) spotters on the ground, the ability to loiter above the target area until opportunities arise and the right sort of aircraft to deliver the blow. Fast jets armed with missiles costing up to 100 times more than the weapons they are trying to destroy are of only limited use.

According to Douglas Barrie, an air-power specialist at the International Institute for Strategic Studies in London, the best solution may be to use attack helicopters, but “it depends how much risk you are prepared to take”. They would be vulnerable to man-portable air defence systems (MANPADs), such as the heat-seeking SA-7, that Colonel Qaddafi has in abundance. Another option may be to mount a drone-based combat air patrol over Misrata which could strike every time a mortar or rocket team popped its head up. But though the early, surveillance version of the Predator drone is being used above Libya, the heavily armed and bigger Predator B, known as the Reaper, which is proving so potent against the Taliban in Afghanistan, is in short supply.

If helicopters are ruled out and there are not enough drones, that leaves only the US Air Force A-10 tankbusters and the AC-130 gunships that were used for a few days in late March and then withdrawn when America handed over command of the air operation to NATO. Last week, at a rather sticky meeting of NATO foreign ministers, Admiral James Stavridis, the supreme allied commander in Europe, was reported to have asked for eight additional “specific” warplanes needed for precision strikes. There is speculation that the aircraft he was asking for were the A-10s and AC-130s. However, as The Economist went to press, there were no indications whether Robert Gates, America’s secretary of defence, would sanction the release of the aircraft and the official line from NATO is that no requests have been made.

They are, however, the only potentially game-changing assets readily available. During the first Gulf war, in 1991, the A-10 Thunderbolt is estimated to have destroyed 900 Iraqi tanks. It flies relatively slowly and can loiter above targets. The AC-130, based on the ubiquitous C-130 Hercules airlifter, is an even more lethal platform than the A-10, with a huge array of heavy weapons and sophisticated fire-control systems. But it is much more vulnerable to ground fire than the heavily armoured A-10 and in “non-permissive environments” can operate only at night.  (photo: Getty)