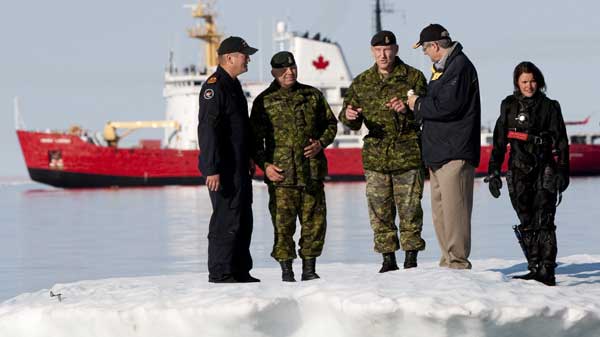 From Canada’s Ministry of Defense:  Operation Nanook commenced today when a combined Naval Task Group set sail from St. John’s, Newfoundland, towards Canada’s Eastern and High Arctic, where other personnel and equipment from the Army, Air Force, and Canadian Rangers will converge over the month of August.

Partners from an array of federal, territorial and municipal governments, as well as the Royal Danish Navy and the US Coast Guard, are participating in the Canada Command-led operation which will take place in the vicinity of Resolute Bay, Nunavut Territory, from August 5-26.

“Operation Nanook demonstrates our Government’s commitment to the sovereignty and cooperation in the Arctic region,” said the Honourable Peter MacKay, Minister of National Defence and Minister of the Atlantic Gateway. “With world attention and increasing travel into and over the vast territory of Canada’s north, it is essential that the Canadian Forces and their partners enhance their operational capability and presence in the High Arctic.”

Op Nanook, named for the Inuit word for polar bear, is the centerpiece of three annual northern sovereignty operations conducted by the Canadian Forces and its partners who share interest in Canada’s North. First conducted in 2007, Op Nanook demonstrates a visible presence and provides opportunities for military and civilian teams to operate and train in Canada’s unique Arctic environment. . . .  (photo: Sean Kilpatrick/the Canadian Press)