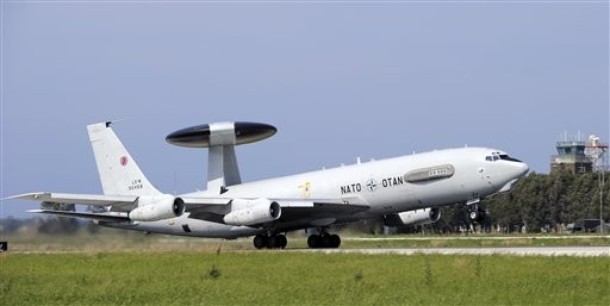 From CBC News:  The government of Canada intends to cut its participation in a NATO air surveillance program, CBC News has learned.

The cuts have not yet been publicly announced, but sources tell CBC that Defence Minister Peter MacKay raised the issue with some allies at a NATO conference in Brussels, this week.

The NATO Airborne Warning And Control System (AWACS) is a series of military airborne surveillance and mission control planes that provides the alliance the ability to monitor air space, and to control fighter aircraft patrolling the skies. . . .

The planes have been in heavy use in the Libyan campaign, monitoring the skies above the war-torn country, and guiding fighter planes towards their targets.

It’s not clear when Canada will end its participation in the program, but sources report the decision has apparently angered some allies. . . .

"Over the course of the past months, the Department of National Defence and the Canadian Forces have identified numerous efficiencies that do not affect the core capabilities or readiness of our military, as part of this government’s efforts to ensure best value for tax dollars," Jay Paxton, a spokesman for MacKay said.

"In tough economic times, this government believes making action-oriented decisions in support of freedom, democracy, human rights and the rule of law are more essential to NATO member states’ security than any other initiative. . . ."

More than 100 Canadian air crew are involved in the program, flying the planes, and operating their sophisticated airborne sensors.  (photo: Canada’s Department of National Defense/AP)