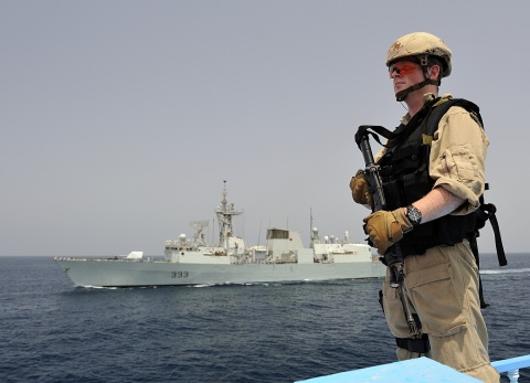 The Government of Canada announced today that it will continue its commitment to maritime security and counter-terrorism in the Arabian Sea region by extending Canada’s contribution to Combined Task Force 150 (CTF-150) until April 2015. The continued presence of military assets in the Arabian Sea region gives Canada and 28 other contributing nations the flexibility and capability to respond quickly to emerging crises in the region. Her Majesty’s Canadian Ship (HMCS) Toronto and her crew of approximately 250 Canadian Armed Forces personnel, based in Halifax, Nova Scotia, are presently patrolling the Arabian Sea region as part of Operation Artemis; Canada’s present contribution to CTF-150. HMCS Toronto will be relieved in theatre by HMCS Regina, based in Esquimalt, British Columbia early in 2014.

“Operation Artemis demonstrates Canada’s commitment to protecting Canadians as part of the global fight against terrorism and to working with our partners and allies for peace and security in the maritime environment of the Middle East,” said the Hon. Rob Nicholson, Minister of National Defence. “Our dedicated sailors, airmen and airwomen are successfully detecting, deterring and disrupting terrorist activities and networks at sea, which hampers terrorist operations ashore. They will continue to promote security, stability and prosperity with our allies.”

“During the four rotations that have been part of Operation Artemis, our crews have done outstanding work, including flag-verification boardings and interdiction operations, which greatly support security in this important region,” said Lieutenant-General Stuart Beare, Commander, Canadian Joint Operations Command. “Canadians can be proud of our role in sustaining good order at sea, and allowing for the safe flow of people and commerce across these waters.”

Since the start of Operation Artemis in May of 2012, Canada has consistently deployed frigates, along with helicopter air detachments to the Arabian Sea region.