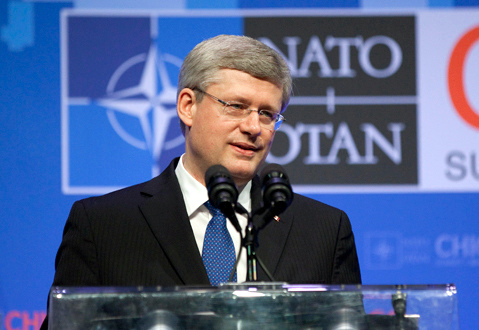 Russia’s aggressive militarism and expansionism are a threat to more than just Ukraine; they are a threat to Europe, to the rule of law and to the values that bind Western nations. Canada will not stand idly by in the face of this threat.

That is why we have taken a strong stand, imposing a broad range of sanctions against those entities and individuals responsible for the ongoing crisis in Ukraine. Since the start of the crisis in Ukraine, Canada has imposed sanctions on nearly 150 individuals and entities. Earlier this week we broadened our approach, announcing economic sanctions against key sectors of the Russian economy.

It is why Canada has pledged more than $220-million in loan and loan guarantees which, once the appropriate conditions have been met to ensure that the funds are being used for their intended purposes, will help Ukraine to stabilize its economy and promote economic and social development. It is why we are providing training for the Ukrainian military, as well as Canadian military personnel and equipment to NATO’s reassurance package in eastern and central Europe. . . .

It is time Mr. Putin matched his words with actions. He must reverse his course in Ukraine. He must withdraw his troops from the Ukrainian border, stop the flow of weapons and militants into Ukraine, and use his influence to persuade the militants, currently operating with the support of his regime, to lay down their weapons and cease the violence. He must also work to ensure that those investigating the shooting down of MH17 are not impeded in any way in their efforts to uncover the truth behind the deliberate or reckless targeting of innocent civilians.

The choice is Mr. Putin’s. He can take these actions to recommit Russia to peace, democracy, and the rule of law or he can persist with the politics of intimidation and aggression, in which case Canada – and its allies – must take further, more punitive steps to isolate Russia from the rest of the world’s democratic states. The values and principles we cherish as Canadians, and for which so many generations have fought and died, demand it.

Stephen Harper is the Prime Minister of Canada.