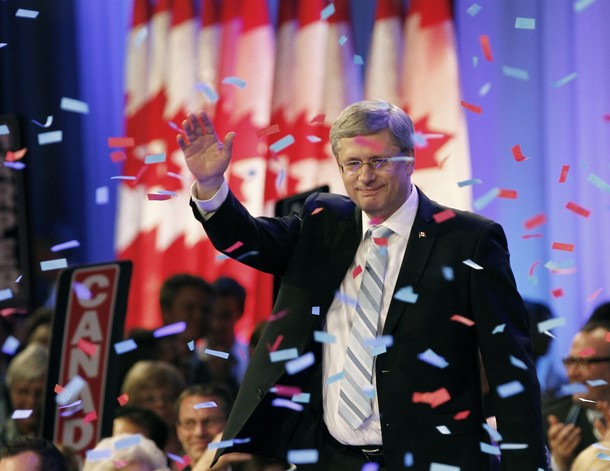 From Lee Carter, the BBC:  Canada’s Conservative party has emerged victorious in the country’s general election, a vote that has also resulted in a huge shake-up for the opposition.

In this new topsy-turvy world, the previously third-placed party, the New Democratic Party (NDP), has become the official opposition and the once mighty Liberal Party has been soundly humiliated by its worst-ever showing.

Having led two minority Conservative governments since 2006, Prime Minister Stephen Harper has now earned a majority mandate, having won 167 of the 308 seats in the Canadian parliament.

Although the opinion polls seemed to show the Tories would regain power, the scale of victory came as a surprise to some political observers.

Mr Harper ran a tightly-controlled, disciplined campaign, concentrating largely on his government’s record in managing the economy, and promising to lower taxes and tackle the country’s debt.

Canada has emerged from a recession as one of the strongest among the G7 group of countries.

One of the party’s biggest breakthroughs on election night was cracking metropolitan Canada, particularly the party’s sweeping gains in the Liberal stronghold of Toronto and the surrounding area.

Ezra Levant, a conservative commentator for the Sun News Network, says the switch of support of visible minorities and new immigrants from the Liberals to the Conservatives is a significant demographic change. . . .

"Most of his changes have already happened incrementally. For instance, Canada’s now a new military power. We were not that way 10 years ago. We have 560 troops enforcing the no-fly zone in Libya… That’s a change in the Canadian identity."  (photo: Reuters)