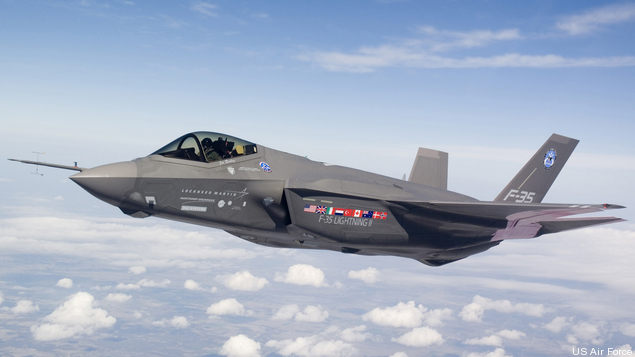 From Sydney J. Freedberg Jr., AOL Defense:  [Former Vice Chairman of the Joint Chiefs of Staff James] Cartwright fears the Pentagon’s most expensive program, the F-35 Joint Strike Fighter, might prove to be as vulnerable to enemy hackers as the old under-armored Humvees were to roadside bombs. "We built the F-35 with absolutely no protection for it from a cyber standpoint," he said. Just as historical aircraft used to have an "EMCON switch" — short for "emissions control" — that could turn off all electronic transmissions from the aircraft when it needed to avoid detection, Cartwright said, today’s aircraft need a switch that shuts off all the electronic apertures through which they can potentially receive transmissions, lest electronically savvy enemies hack into them. "As a guy who spends his life on the offensive side of cyber, every aperture out there is a target," Cartwright said.

"There is a nexus coming between electronic warfare and cyber," between traditional electronic jamming and countermeasures and new-fangled hacking, Cartwright concluded. "One knocks the door down and the other goes in and does the dirty work." The current turf wars between the electronic warfare and cybersecurity communities miss the vital point, he said. In the cyber realm, "we’ve been thinking 90 percent defense, 10 percent offense. That’s bass-ackwards for us," he said: We need to stand ready to seize the electromagnetic offensive.  (photo: U.S. Air Force)  (via @Jason_Healey)