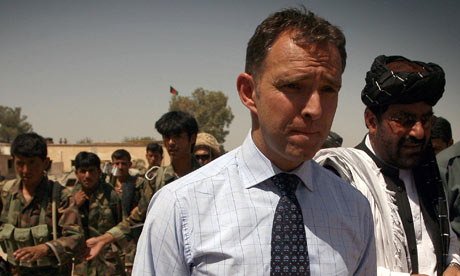 From Jonathon Burch, Reuters:  Children are probably safer growing up in Afghanistan’s major cities, including the Taliban stronghold of Kandahar, than in London, New York, or Glasgow, NATO’s top civilian envoy to Afghanistan has said.

Mark Sedwill’s comments were made during an interview to be aired on Monday on Children’s BBC Newsround [video], a popular British daily current affairs program aimed at children.

Children living in the Afghan capital Kabul had told the show’s presenter they felt unsafe on the streets because of the risk of bombs. But Sedwill dismissed their fears.

"Here and in Kabul and the other big cities, actually, there are very few of those bombs," he said.

"The children are probably safer here than they would be in London, New York or Glasgow or many other cities," he said, according to comments released by CBBC before the show was aired.

"It’s a very family-orientated society, so it is a little bit like a city of villages," he said. …

Sedwill said he had been trying to explain that violence was not at the same level in every part of Afghanistan and that in cities like Kabul, where security had improved, violence was comparable to what many Western children might experience.

"Any comment you have to clarify obviously wasn’t very well put and the comparison I made with Western cities distracted attention from the important point I was seeking to make," Sedwill said in a statement later on Monday.  (photo: Susannah Ireland/Rex Features)