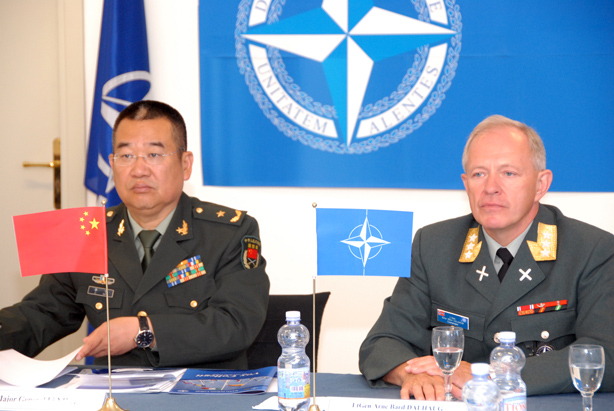 From Richard Weitz, Jamestown Foundation:  NATO interest in engaging China derives precisely from Beijing’s rising potential to shape the international security environment in both benign as well as adverse ways from Brussels’ perspective. NATO officials see opportunities to cooperate with China in promoting security in Afghanistan, Pakistan and Central Asia, countering maritime piracy in the Gulf of Aden and curtailing nuclear weapons proliferation in Iran and North Korea. But they also complain about cyber espionage and cyber attacks on NATO countries believed to come from China as well as Beijing’s limited support for NATO logistical efforts in Afghanistan and Pakistan (The Guardian, March 10). . . .

A major consideration driving Chinese interest in engaging with NATO is the negative concern to prevent the alliance from harming China’s security interests through its military and other actions. For instance, Chinese analysts worry that NATO efforts to negotiate the relocation away from Europe of Russia’s large stockpile of tactical nuclear weapons could result in Moscow simply relocating these weapons closer to China [4].

There is also an argument that NATO offers the PRC another avenue to influence foreign policies of the European Union. Correspondingly, the PRC has made a point to increase communication, cooperation engagement with the EU and its individual countries. Some PRC experts hope that collaboration between the PRC and EU will push the United States to act less unilaterally and adopt a less confrontational policy towards the PRC in correspondence with Europe’s desire not to harm the PRC economy and lower interest in East Asian military affairs [5].

Chinese representatives are uneasy about the alliance’s increased emphasis on global partnerships that extend into Asia. A particular concern is that Washington may be using NATO to help construct a global alliance network to contain China. Chinese writers have noted growing cooperation between NATO and India, Japan, Australia and other Asian states that may want to balance the growth of Chinese military power.

These concerns contribute to Chinese ambivalence about the U.S. and NATO military presence in Afghanistan and Central Asia. Chinese analysts perceive NATO’s Afghan mission as struggling but worry that it might establish an enduring NATO military presence on China’s border (China Daily, May 21).  The People’s Daily stated NATO “should make efforts to strike a balance among security, governance, and development in Afghanistan, prevent its counter-terrorism efforts from producing the opposite results, and avoid leaving Afghanistan in a mess like the Soviet Union did” (People’s Daily, February 27).

For their part, NATO officials are eager to secure additional financial support to help pay for the alliance’s costly plans to build large Afghan security forces to preserve security even after NATO removes its combat troops from the country in 2014 (Reuters, April 19). Beijing however has been seeking to avoid tying its fate too closely to the Afghan government in Kabul. Helping build the Afghan security forces could antagonize the Taliban insurgents, who might turns their guns on China directly or, more likely, be less eager to suppress Uighur separatists and other Chinese Muslim groups opposed to Beijing’s religious policies.

The U.S. pivot to Asia also has heightened Beijing’s concerns about NATO, Qu Xing, Director of the Foreign Ministry-related China Institute of International Studies, termed the debut appearance of Australia, Japan, South Africa and North Korea (sic) at the Chicago summit as reflecting “the U.S. desire to expand NATO into Asia or to establish closer ties with allies in the region to handle the challenges that the US mentioned in Asia, especially East Asia.” Another senior government-affiliated scholar suggested NATO planned “to set up some strategic strongholds in the Asia-Pacific region” (China Daily, May 21). NATO’s engagement with Mongolia has further exacerbated these concerns, which probably prompted [NATO Secretary General Anders Fogh] Rasmussen’s recent downplaying of NATO’s support to the pivot (Xinhua, June 30; China Daily, May 17; NATO.int, March 19).

Other constraints on stronger Chinese-NATO ties include Beijing’s official position of nonalignment and aversion to military alliances, the different values between China and NATO and the traditional lack of interest in many European governments about China’s growing military potential in Asia. Beijing also wonders why NATO still exists as shown by a People’s Daily commentary that warned the alliance “should not maintain its unsustainable life by exaggerating others’ military threats, pulling new members into it and establishing expansive missile defense systems” (People’s Daily, May 23).

NATO’s efforts to expand its global role, combined with China’s growing security engagement in regions to its west—Afghanistan, Central Asia, Gulf of Aden and the Mediterranean—seem destined to require further political dialogue with NATO. Next steps could include joint anti-piracy exercises between their parallel missions in the Gulf of Aden. Similarly, China could participate in NATO-led natural emergency relief exercises, such as those held in many of the former Soviet republics [6].A longer term goal might include institutionalizing their relationship by creating a NATO-China council or commission similar to the ones NATO has established with Russia and other select partners.

Afghanistan is likely to be the main driver for the next few years. Both China and NATO want to see a peaceful and prosperous Afghanistan, but NATO’s ongoing military pullout could worsen hitherto largely latent tensions over burden sharing and buck passing. Rasmussen told the Chinese press that Afghanistan’s neighbors would need to provide more support for that country as NATO curtails its mission there (Xinhua, September 17, 2011).

Beijing remains uncomfortable with NATO’s growing ties with other Asian countries, so joint projects in East Asia will be difficult to achieve. NATO members need to discuss more with one another their perspectives on China’s security priorities and policies. The United States—as NATO’s sole member with major military assets in the Pacific—will need to lead efforts to inform its Asian allies about NATO’s evolving approach toward China. In most cases, “shared awareness and de-confliction” seems an appropriately modest but still achievable and useful goal for issues of mutual concern between NATO and China.  (photo: NATO)

6. “The Rise of China and Possible Implications for NATO,” NATO, Spring 2011.